DRAPER, Utah (CelebrityAccess) After U2 wrapped its massive 360 World Tour, it put its three massive “Spaceship” stages (known outside of the business as “The Claw”), into storage and tried to shop them. One will now exist at an aquarium in Draper, Utah.

The band and its crew, orchestrated by Jake Berry, needed three Spaceship stages to move around the world, playing to more than 7 million people in 30 countries. As the band played beneath one of them, another would be constructed at the upcoming stadium site as yet another was being broken down from the last show. It was well known that Live Nation was interested in shopping them around but in 2015, they were in storage, looking for buyers.

“I can’t remember if there are two in Europe and one in America or vice versa, but between Belgium and Pennsylvania are where the three stages reside at the moment, at storage facilities,” Live Nation’s CEO of Global Touring, Arthur Fogel, told this reporter at the time. “There were some interested parties, especially shortly after the end of the 360 tour but nothing ever materialized. But, hey, if you know anybody who’s interested tell them to give me a call.”

Apparently there are only two Spaceships left, and one now belongs at the Loveland Living Planet Aquarium. The 165-foot-tall structure will crown its nine-acre Science Learning Expansion, according to Fox 13 News. 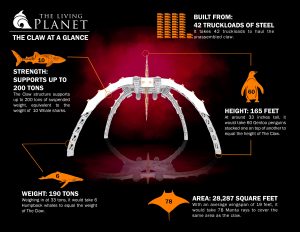 “We are excited to bring this iconic monument to its permanent home in Utah,” Brent Andersen, LLPA’s Founder & CEO, and a marine biologist, told the station. “This landmark will shine a light on our mission to inspire people to explore, discover, and learn about Earth’s diverse ecosystems. We will use it to help people understand that the environments we live in are all interconnected as one global ecosystem, the living planet.”

In addition, the campus will include an 80,000-square-foot Science Learning Center providing an “immersive experiences” for guests to learn about the natural world. Those experiences include a five-story Asian Cloud Forest Habitat & Endangered Species Conservation Center, science stations, and indoor and outdoor animal exhibits.

Plenty of events are planned underneath The Claw, which will feature a 7,000-seat and 350-seat outdoor venues, according to Fox 13, most of them involving digital content and virtual reality technology.