Taylor Swift will open the American Music Awards Oct. 9, her first awards show performance in three years, performing “I Did Something Bad” from her Reputation album

According to a police report, Judge Brett Kavanaugh, after a UB40 concert, was questioned by police in 1985 regarding a bar fight after a patron, who apparently looked like the singer of the band, saw a group of young people staring at him and put Kavanaugh in a headlock, which has made the New York Times because it’s shocking how old UB40 is.

Louis CK, who took a low profile after sexual misconduct, did a surprise standup routine at New York’s Comedy Cellar on Saturday to rousing applause

Van Morrison is releasing his 40th studio album, The Prophet Speaks, Dec. 7 then plays at the Fox Theatre in Oakland Nov. 14-15 and The Colosseum at Caesars Palace in Las Vegas for several dates in January and February.

“Rocketman,” a musical fantasy starring Taron Egerton as Elton John, has dropped its official teaser trailer (Egerton is the vocals on the songs)

McAfee reports that the actress/VJ/singer Ruby Rose is the most dangerous celebrity to search for online, replacing last year’s “winner,” Avril Lavigne (musicians are low on the list this year with Adele the highest ranked at No. 21 followed by Shakira at No. 27 and Lavigne at No. 30). 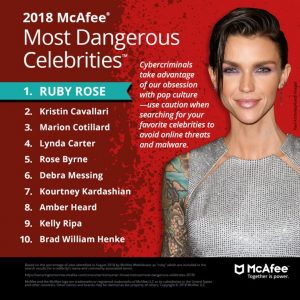