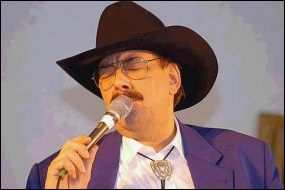 (CelebrityAccess News Service) — Nominees have been selected and ballots have been distributed to a panel of international music industry leaders to determine the recipient of the Global Country Artist Award. Initiated by CMA's Global Markets Task Force in 2002, the award recognizes outstanding achievement by a country music artist who has furthered the popularity of the format and brought attention to country music in their foreign-based territory. The winner will be invited to perform at the 2004 CMA Music Festival/Fan Fair June 10-13 in Nashville, TN.

"The spirit of the award is to recognize artists who are doing well in their own territories and not those artists who are achieving most of their success in the United States," said Jeff Walker, who heads the Global Markets Task Force.

The 10 nominees designated from territories worldwide are:

John Brack (Switzerland) has become a leading figure of Swiss country music. Each of his albums, and there have been more than 20, has sold in excess of 350,000 copies, a record for Swiss country music. Brack performs more than 100 concerts a year, including international performances with shows in the Wembley Arena, Dublin, Las Vegas, Frankfurt, Peterborough/UK, Bad Ischl/Austria, Hamm/FRG, Holland and Silkeborg. Brack, who has been dubbed "Mr. Swiss Country" by the media, has also appeared at CMA Music Festival/Fan Fair. In 1979, he signed a contract with EMI Switzerland and signed with BMG Switzerland a decade later.

Troy Cassar-Daley (Australia) has been making his mark on the country music scene in Australia and the U.S. since he was a teenager. In 1995, he won the Australian Recording Industry Award (ARIA) for Best Country Record and the 1996 Tamworth Golden Guitar Award for Best Male Vocal. He has toured Australia with Merle Haggard and LeAnn Rimes. In 1998, he added thee more Golden Guitar Awards (Best Male Vocal, Album of the Year and Best Video), two MO Awards and a second Country Music Association of Australia Entertainer of the Year Award. In 2000, he won Best Male Vocal and Song of the Year at the CMAA Awards for "They Don't Make 'Em Like That Anymore."

Kasey Chambers (Australia) was signed to EMI Australia in 1998 and her first solo album, The Captain, which was released in the U.S., UK and Europe, has sold more than 300,000 copies in Australia earning her two ARIA Award for Country Album of the Year and Female Artist of the Year in 2000. She had two sold-out national tours following her second album, Barricades &Brickwalls. In 2002, the instant success of "Not Pretty Enough," the third single from the album, gave her a simultaneous No. 1 for the single and album on the National ARIA chart – making her the only Australian act to achieve that milestone in 2002. The album has gone on to sell 7x Platinum and win Chambers an armload of awards including CMAA Entertainer of the Year.

Ruud Hermans (The Netherlands) has been writing, recording and performing country music for more than 35 years. After starting out with a band called The Tumbleweeds, which was later renamed Tulsa, Hermans has toured worldwide and still plays concerts in Europe. He also takes part in various singer/songwriter sessions with Dutch and international artists, such as Dick van Altena, Rob Crosby, Frank Jansen and Victoria Shaw. Hermans co-founded the Dutch Country Music Association and championed the association's awards gala, which he also hosts. In 2002, he was inducted in the Dutch Country Music Hall Of Fame.

Charlie Landsborough (UK) is a singer/songwriter with a 30-year, road-to-success story with most of his recognition following the success of What Color Is The Wind in 1995. He has made TV and radio appearances on GMTV, BBC Pebble Mill Live and Kenny Show Live; sold more than 700,000 albums; and topped the British Country sales charts. In 2000, he won his third successive BMCA Best Male Vocalist trophy, the Southern Country Award for best album and made his first promotional trip to Australia. In 2002, he made an appearance at the closing of the Special Olympic in Dublin, where he sang his song, "Special," to thousands of European athletes.

Jason McCoy (Canada) has released four albums of mostly original material making a name for himself around the world. He is a three-time winner of Canada's coveted SOCAN Songwriter of the Year Award and the Canadian Country Music Association Male Artist of the Year. He's received many nominations for Juno Awards; has collected 19 CCMA award nominations; and has logged seven No. 1 music videos on CMT Canada. McCoy has proven chart success. He has toured Australia twice and played throughout Canada opening shows for artists including Terri Clark and Martina McBride.

Charlie Nagatani (Japan) started singing country music in 1956 at 20. He and his band, The Western Cannonballs, began performing at U.S. Military Clubs in Japan, Okinawa, Taiwan, Guam, the Philippines and Thailand until the end of the Vietnam War. When he returned to Kumamoto, Nagatani opened a Country Music saloon named "Good Time Charlie's," where he still entertains. In 1989, Nagatani organized the first "Country Gold" festival, and in 1992, he traveled to Nashville to record his first album, which featured friends Emmylou Harris, Bill Monroe, Porter Wagoner and the Osborne Brothers. In 2001, an independent filmmaker produced a documentary of Nagatani's compelling life.

The Rankins (Canada) are five siblings that started their recording career in 1989. After touring and releasing a second independent project, they were signed to Capitol/EMI Music Canada in 1992. They received a lot of recognition as entertainer/songwriters winning several SOCAN, Juno and East Coast Music Award trophies – including several for Country artist or group of the year. Several of their album projects have sold more than 200,000 unites. They toured Canada, the U.S. and overseas. In 1999, the group ceased recording so individual members could pursue independent careers, but they are still admired for their blend of Country Music with Canadian roots and Celtic overtones.

Replete Bros. (Greece) is composed of brothers Antonis and Dimitris, who are the composers, lyricists, interpreters, performers, arrangers and producers of their own work. They are the only professional country music group working with record companies in Greece. Since their professional debut in 1995, the Replete Bros. have performed live all over Greece and appeared in many television and radio specials. Antonis is a member of the Nashville Songwriters Association International and serves as president of the Country Music Club of Greece.

In addition to selecting the 2004 Global Country Artist, the 25-member international panel is being asked to decide if a posthumous Global Country Artist Award should be presented to Slim Dusty of Australia. Dusty had a career that spanned six decades and was one of the most awarded Australians, ever. He was the first Australian to receive a Gold record, the first to have an international hit record and the first singer in the world to have his voice beamed to earth from space when astronauts Bob Crippen and John Young played "Waltzing Matilda" in 1983 as the space shuttle passed over Australia. He won 35 Golden Guitars; more Gold and Platinum record awards than any other Australian artists; ARIA Awards including induction into the ARIA Hall of Fame; Gold and Platinum video awards; MBE and Order of Australia trophies; and he was one of the earliest inductees to the Country Music Roll of Renown. In 1999 he was named Father of the Year and Senior Australian of the Year. He was known as the "Historian of the Bush," but his songs and his stage performance reflected the changing face of Australia over half a century. He died Sept. 19 after a lengthy battle with cancer. He was 76.

Candidates for the Global Country Artist Award are chosen from artists nominated by CMA's international membership. The winner will be invited to accept the honor at 2004 CMA Music Festival/Fan Fair in June and perform on the Greased Lightning Riverfront Park Stages. Lee Kernaghan of Australia received the award in 2003. –Jane Cohen and Bob Grossweiner