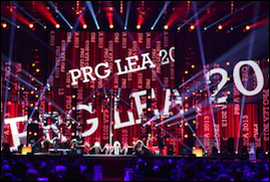 FRANKFURT ,Germany (VIP NEWS) — Roughly 1,300 guests from the national and international music, events and entertainments scene joined the eighth PRG Live Entertainment Award (PRG LEA) ceremony, which took to the stage and the red carpet in the Festhalle in Frankfurt on 9 April.

The ceremony also marked the official opening of the Frankfurt Music Fair and the technology show 'Prolight + Sound', held at the same time.


A total of 15 of the coveted prizes went to organizers, artists' managers, concert agencies and large venue and club operators.


LEA CEO Jens Michow, producer of the show and president of the German Federal Association of Event Organizers (bdv), gave a positive résumé: "The German Live Entertainment Award gave us the opportunity once more to present not only the many different facets of this business sector, but also its immense significance within the cultural industry. We would like to thank the city and the Frankfurt Music Fair for offering us this outstanding platform."


The Frankfurt Deputy Mayor for Business, Sport, Security and Fire Services, Councillor Markus Frank, was also full of praise: "I couldn't be happier that for the third time, we have been able to open the International Music Fair in Frankfurt with the excellent Live Entertainment Award."


The initiative – a federal government program to promote the music industry – announced this year's winner at the gala evening in Frankfurt: The Colos-Saal in Aschaffenburg had reason to be thrilled at the cheque for 20,000 euro.
The two other nominees, the M.A.U. Club in Rostock and the Music Hall Worpswede, did not leave empty-handed, either. Each of them had already received a cheque for 5,000 euro before the awards ceremony.


"The Club Award can be seen as a testimony to the important grass roots work that the organizers and employees at the smaller concert venues provide, often times behind the scenes and without any proper recognition", emphasizes Ina Keßler, Managing Director at Initiative Musik. "The small stages are invaluable to promote raw talent. When they tour clubs, young musicians acquire the essential experience to help them survive on larger stages later on."