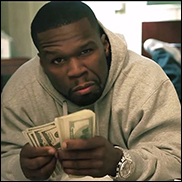 (Hypebot) – In his latest dubious attempt to extricate himself from the financial hole in which he currently resides, rapper Curtis Jackson (better known as 50 Cent) has filed a lawsuit against Rick Ross after Ross released a mixtape featuring beats from Cent's "In Da Club."


50 Cent has filed a lawsuit (Dec. 23) against Rick Ross for rapping over his "In Da Club" beat as a means to promote Black Market, his eighth studio album, Billboard can confirm. The MMG boss did a remix of 50 Cent's 2003 hit on his #RenzelRemixesmixtape, released Nov. 27..


I can see why 50 Cent and his lawyers might feel this lawsuit is a good idea: 50 Cent is in the middle of bankruptcy proceedings. On top of that, the rapper owes $7 million to the plaintiff in a sex tape lawsuit — one that also involves rival rap star, Rick Ross. (The woman in the sex tape is the mother of one of Ross' children. 50 Cent can be heard taunting Ross in the recording.) 50 Cent is also engaged in a $75 million lawsuit against his former legal team, so there's bills to be paid there as well.


50 Cent's lawsuit takes aim at the rap industry's standard operating procedure: mixtapes. Rick Ross rapped over 50 Cent's "In Da Club" in his latest mixtape, much as thousands of rappers have rapped over the beats of others on mixtapes since the early days of the genre. It's an accepted — if quasi-illegal — practice. Everyone raps over everyone else's beats on mixtapes, almost all of which are given away as promotional tools.


Defendant’s unlawful use of Jackson’s registered trademark is apparent on disc one of the Remix. Defendant publicized images of the Remix in various news and social media outlets including on Defendant’s Instagram and Twitter page in which the song title, “In Da Club Ft. 50 Cent” is deliberately portrayed.


Defendant’s Remix not only uses Jackson’s name and performance to attract listeners, but it also is a blatant commercial advertisement for Black Market. At least six times, throughout the Remix, Defendant delivers the following “hook” as a commercial message promoting the sale of Black Market: “Only on the Black Market, December 4th The Album is out.”


Defendant, without Jackson’s, or, upon information and belief, any copyright owners’ knowledge or permission, used a significant piece of Jackson’s “In Da Club” recording and composition, including approximately forty-five seconds of Jackson’s vocal performance, on the three minute Remix, as well as Jackson’s trademarked name to promote and publicize Black Market..


50 Cent Is the Future is the first official mixtape released by 50 Cent and G-Unit. The mixtape was recorded after his unreleased album Power of the Dollar was recorded and 50 Cent was dropped from the label and blacklisted from the recording industry due to being shot.

That's the game. If labels really wanted to be in litigation business, they'd have much more success here than suing file sharers. But they don't sue rap artists. Everyone overlooks the use of other people's beats and vocals on mixtapes. Labels won't shut this down because it's a great promotional tool that keeps rappers in the public consciousness during lulls between album releases and propels them into headlines during the run-up to the latest official release. It's PR that costs them nothing (the artists foot the bill for production and distribution) and carries with it street cred most labels can never hope to obtain on their own.


Likewise, rap artists do unto others and allow it to be done unto them. Everyone "steals," as 50 Cent's legal PR so gracelessly (and inaccurately) puts it. But 50 Cent won't let Ross "steal" from him, despite the fact that he's spent several years "stealing" from others. 50 Cent is willing to put his own financial woes and his personal animus against Rick Ross ahead of the rap industry. No one wants this legal Pandora's box opened.


Adding to the stupidity and the hypocrisy is 50 Cent's attitude towards infringement — at least the attitude he displayed before burying himself in legal fees and lost lawsuits. Back in 2009, he told CNBC that infringement is unavoidable, but not without its benefits.


[50 Cent] sees it as a part of the marketing of a musician, because "the people who didn't purchase the material, they end up at the concert." He says that people can fall in love with the music either way, and then they'll go to concerts. He notes that you can't stop piracy either way, so why try to fight it?


The rap world is built on infringement. It's the underlying structure that allows unknowns to attract a following. It's the framework that rappers build on to further their careers and a way to both promote themselves and give longtime fans gratis, unofficial "thank yous" for their support. 50 Cent's self-interested lawsuit undermines all of that. He may have the law on his side, but he's basically issuing a federal-level "fuck you" to other artists, his fans and the gray market that keeps his part of the recording industry afloat.