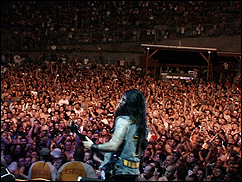 LOS ANGELES (CelebrityAccess MediaWire) — The success of this year's Ozzfest has prompted AEG to consider returning the venerable festival to its original two-day format.

This year's event was a three-stage, one day event held at Pizza Hut Park in Dallas and it marked the first year that AEG produced the festival after taking over from Live Nation last year. There had been some speculation as to whether there would be a festival at all this year after Ozzy announced in April that he would headline the Canadian Monsters of Rock but Ozzfest did go off and in a big way, drawing 30,000 fans and grossing nearly $3.5 million.

Ozzy founded the festival in 1996 after being snubbed by Lollapalooza and the touring festival had typically run for two days. In 2007, the festival attempted to shake things up by offering free tickets to fans with sponsors paying for the bands but this problems with the ticketing system for the free show and some musicians expressed discontentment.

The perceived Ozzfest ennui appears to have been washed away by the 2008 installment of the summer festival and strong performances by Metallica, Ozzy, Sevendust and others made a good impression on the fans.

"Pairing Ozzy with Metallica, along with so many other great acts, was a match made in heaven for the 30,000 hardcore fans who were banging their heads at Ozzfest 2008. We can’t wait to see what Ozzy has up his sleeve for 2009, as Ozzfest just keeps getting more exciting every year." said AEG President Randy Phillips, describing the event. – CelebrityAccess Staff Writers