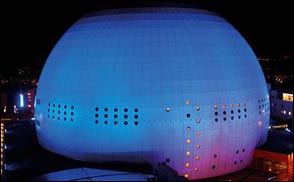 STOCKHOLM, Sweden (CelebrityAccess MediaWire) — The city of Stockholm has selected AEG to book and operate the four Globe Arenas in Stockholm. By forming the association, the venues will be included in the network of international of arenas affiliated with AEG Facilities.

The Globe, which opened in 1989 with the world ice hockey championships, has a capacity of 16,000. It is the newest of the four arenas in the agreement which also includes the Hovet Arena (capacity 8,300), the Söder Stadium (capacity 16,200) and the Annex Arena (capacity 3,500).

The agreement calls for AEG Facilities, the division of Los Angeles-based AEG that specializes in the management of venues, to operate and book the arenas while supervising a broad range of improvements to the Globe Arena.

"This is very positive news to the city of Stockholm and for the people that live here. The transaction itself means that the city receives a considerable financial contribution, and at the same time the audience will enjoy better music, sports and entertainment events", says the Mayor of Stockholm Mr. Sten Nordin.

"It's a huge success for Stockholm as an event city to be able to attract a global arena operator. With AEG as a partner Stockholm qualifies into the Champions league of event cities, exactly where we belong", says the vice Mayor of Stockholm Mrs. Madeleine Sjöstedt.

"We have always considered Stockholm to be one of the world's most prestigious cities and an important stop for international concert tours. Adding the Globe arenas to our international network of important venues will surely establish the arenas as best in class and ‘must-play' sites for any major concert tour. We are also very honoured to have the opportunity to work with the Stockholm City Council in the development of one of the best arena areas in Northern Europe" says Bob Newman, Chief Operating Officer, AEG Facilities. – CelebrityAccess Staff Writers