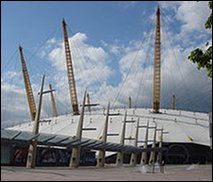 The Government is a winner from the O2's success, as one of the conditions of the sale of the venue to US sports conglomerate Anschutz Entertainment Group was that 15% of its net profits would be paid to the taxpayer for 25 years. However, it will be some time before the Government turns a profit on the O2, as it spent £600m building the arena, which first opened a decade ago according to The Independent of London.

The O2, run by AEG's UK company, Ansco Arena, is the world's most popular music venue, finishing 2009 having sold 2.3 million tickets, ahead of its major rivals, the Manchester Evening News Arena and Madison Square Garden in New York.

Ansco's income is generated from a rental charge and from taking a proportion of ticket sales, which both vary depending on the performer. Despite the boost to its revenue, Ansco's bottom line suffered due to the economic downturn.

Ansco still owes AEG £416.3m, which it invested in the conversion, and the debt left the company with £213m of net current liabilities last year according to The Independent. However, the accounts state that this is not a business risk since it is repayable on demand, and AEG has committed to financially supporting the company if necessary for at least another year.