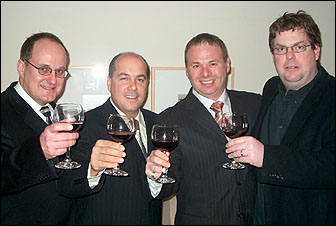 Toronto, ON – The Agency Group is proud to announce the inclusion of two of their clients as judges for the Canadian Idol premiere series. The Agency Group’s most recent client, music industry veteran, Jake Gold, and internationally acclaimed, Juno award-winning singer/songwriter Sass Jordan started their duties as judges, as the first round of auditions takes place in Winnipeg this week.

"I’m absolutely ecstatic about two of our finest clients being on board as Canadian Idol Judges. Sass’s passion and artistic savvy combined with Jake’s tenacious ability to recognize talent is sure to make the premiere of this Canadian based series a tremendous success” Steve Herman, of The Agency Group told CelebrityAccess.

In the midst of recording her sixth album, Sass Jordan has sold over one million CDs worldwide over the course of her career. She steps up to the new position of Canadian Idol judge after returning from her stint as lead role, Janis Joplin, in the off-Broadway hit “Love, Janis”. Sass’s live performance reputation as well as her stellar resume of collaborations (Bryan Adams, Van Halen, Aerosmith, Carlos Santana and Steve Perry) make her an experienced and knowledgeable judge to represent the artist perspective.

Jake Gold’s illustrious career as one of the nation’s most innovative, highly respected managers is the stuff legend is made of. Jake is best known for his role in establishing and transforming The Tragically Hip into a national icon. Jake has raised the bar for management excellence in this country, earmarking his company, The Management Trust, as one of the most heralded entities in the entertainment industry.

"The Management Trust has been a flourishing learning experience," said Stertz. "Twelve years with the company has allowed me to expand my knowledge and my life experiences. I feel extremely privileged to have worked with such amazing people and artists. I look forward with great anticipation to the future as we broaden our horizons."

Additionally, Audra Jager has joined The Management Trust as artist manager and will assume an ownership position in a new firm, controlled by TMT. Jager is a veteran of the Vancouver music scene, where her love of music was evident even as a teenager. Only 19, she hosted her own co-op radio show and ran one the most respected (and quirky) fanzines on the West Coast. In 1991, she joined Teamworks Management and played a central role in developing the careers of such artists as Mathew Good and Econoline Crush. The late 1990's she sojourned to Los Angeles where she worked, as a booking agent with various acts, many on the FBI roster.

Commenting on her new role Jager offered, " I'm extremely honored to be working with such knowledgeable, respected and cool people as Jake, Allan and the whole team of The Management Trust. We share the same visions for the future of developing artists, and I'm excited at the prospect of implementing a long, successful and musical partnership."

"Audra's stellar reputation preceded her," said Gold. "She has great ears, a real sensitivity to needs of the creative spirit and will be an exceptional addition to our resources."

Located in TMT's Toronto office, Jager will continue her two year relationship as manager of Aquarius Records most recent signing (and all-round maniacs) "Crowned King". As part of her mandate, Audra is expected to sign more artists in the months to come.

Christian Gregg and Lindsay Honeyman continue to serve the firm in their respective positions of talent scout and administrative assistant. TMT's current roster consists of Gord Downie, The Watchmen, Priya Thomas, The Populars and their newest addition, Crowned King.

Courtney Love has appointed a new team of representatives. Her management is being handled by New York managers Dave Lory and partner David Leach, in association with Barber’s Red Ceiling Company. Lory and Love have also appointed booking agents worldwide: Marsha Vlasic at MVO (North
and South America and the Pacific Rim) and Dave Chumbley at Primary Talent (UK and Europe). Handling media for North America is PMK–Jill Fritzo in New York and Heidi Schaeffer in Los Angeles. For the UK and Europe, LD Communications will handle all media, headed by Bernard Doherty and Claire Jarvis. Courtney Love’s business affairs are being
handled by Jim Zumwalt at Zumwalt, Almon and Hayes in Nashville.

Love is currently in France recording her new album
“America’s Sweetheart”, slated for release worldwide in the fall. Produced by James Barber and featuring songs co-written with songwriter Linda Perry, (who has recently penned hits for Christina Aguilera and Pink), this will be Love’s first album in four years. “America’s Sweetheart” will be Love’s first album released under her own name; she previously recorded as a member of Hole. Several of the world’s largest record companies have sent their presidents to France to vie for the opportunity to release Love’s new album.