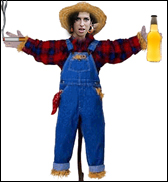 Where did he go for inspiration? To the music charts and the infamous celebrity Amy Winehouse, according to Ananova. Known for her drug induced skeletal appearance, beehive hairdo, tattoo ridden body whose alleged crack smoking addiction and alcohol guzzling have given the song bird a ghastly appearance. This manifestation of her likeness is quite literal in the scarecrow and it seems to work keeping away birds, not to mention small children.

"The pigeons are terrified, they're sitting up on the telephone wires too scared too come into the field which is brilliant. Every farmer needs an Amy scarecrow," He said.
"She's the best scarecrow we've ever had and she's doing a brilliant job. In fact she's doing a better job scaring the birds than she is singing at the moment.

"I'd be happy to offer her a full time job if she needs one when the singing is over", according to Ananova.

The idea of using Amy as a scarecrow came to the farmer when he brought the problem of his traditional scarecrow not keeping the birds off his beets to his local pub buddies and they all came up with the idea of the ‘scary’ rock pop star as a ‘crow’.

Amy has worked so well it has been suggested that he try other infamous rockers for their drug depreciated looks for scarecrows such as Pete Doherty and Blake Fielder Civil to join Amy in the fields.

"They're pretty scary looking too though I'm not sure they'd do as good a job as Amy," he added, according to Ananova. –by CelebrityAccess Staff Writers