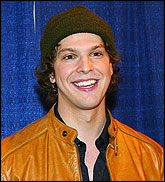 (CelebrityAccess MediaWire) — And the band played on. On January 14, the 16-time World champion Boston Celtics held their first “concert within a game” promotion in partnership with ANC Sports Enterprises at the FleetCenter in Boston, Massachusetts. Gavin DeGraw, a fast-rising 26-year-old singer/songwriter and J Records recording artist, performed in front of a sell-out crowd of 17,600 NBA fans during a 106-94 Celtics win over the Atlanta Hawks. DeGraw performed his #1 hit single “I Don’t Wanna Be” from his Platinum album Chariot during a special halftime concert and then rocked the FleetCenter and more than 6,000 fans after game. The hour long performance had a true NBA flare including a duet with Celtics forward Walter McCarty.

ANC Sports Enterprises is making a significant impact in the team-marketing arena. The “concert within a game” promotion, a concept that ANC Sports began last year in partnership with the Boston Bruins of the NHL, is one example of how ANC Sports has begun offering clients like the Arena Football League (AFL) and the NBA’s Boston Celtics a diverse offering of marketing services designed to impact the box office.

ANC Sports’ first venture in 2005 with the Celtics was a resounding success for the team. The unique program, which brings music and professional sports together for one evening, has become a model the Celtics will use in the future to draw new fans and sponsors to games. ANC Sports designed the “concert within a game” program to significantly increase incremental ticket sales and sponsorship revenue for professional sports teams.

“Our vision to combine the NBA and other sports properties with up-and-coming musical performers was designed to benefit the team as well as the recording artist,” explained Mark Lev, Executive Vice President, Sales and Marketing, ANC Sports. “Teams will see increased ticket sales, new sponsors and a rock star energy surrounding their games, while the emerging artists will have the opportunity to expand their fan base and play in larger venues. It’s a winning formula for both sides.”

ANC Sports assisted with ticket promotion and secured sponsors for the event. Verizon Wireless and popular Boston radio station WXKS-FM (Kiss 108) were brought on board as presenting sponsors, providing the Celtics with additional revenue and promotional opportunities with a young, hip radio station that that was attracted to the game through the presence of DeGraw.

“We were pleased to offer our loyal fans the opportunity to see some great basketball along with a rising star in the music world for the price of a single game ticket," said Rich Gotham, Executive Vice President for the Boston Celtics. “Through the ‘concert within a game’ promotion, ANC Sports helped us to reach new fans and sponsors, while creating a great marketing buzz for the team.”

Currently, ANC Sports is working with other professional sports teams to bring this idea to life. The next “concert within a game” promotion featuring DeGraw will take place Wednesday, February 16th when New Jersey Nets host the Sacramento Kings at the Continental Airlines Arena in New Jersey. –by CelebrityAccess Staff Writers