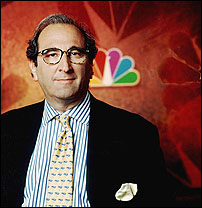 Andrew Lack has been named chairman and chief executive officer, Sony Music
Entertainment by Howard Stringer, chairman and chief executive officer, Sony Corporation of America. Lack, who has been president and chief operating officer of NBC since June 2001, and president of NBC News for eight years prior to that, will join Sony in early February. He will be headquartered in New York City and report to Stringer.

"We are delighted that Andy will join Sony and lead our music company," said . Stringer in making this announcement." He is the most rare of senior entertainment executives, equally adept at business, management, strategy and value creation, as well as a consummate and proven developer of content, talent and ideas. His skills and energy will be of enormous value as we move to transform our music business in this most challenging time for that industry."

"I am very pleased to welcome Andy to Sony," said Nobuyuki Idei, chairman and chief executive officer, Sony Corporation. "His years working with Jack Welch and the GE team, together with his first hand experience with content creation, consumer habits and tastes, will be a tremendous asset to our entire company. In addition, his awareness of global issues and knowledge of distribution systems and technology will enable him to move quickly as we reengineer our music operations."

"This is a pivotal point in the evolution of all content business," said Lack. "Sony, through its device and content companies is at the nexus of that evolution, and is poised to be the leader in content creation and distribution in the digital age. I am thrilled to have been asked to join Sony Music Entertainment, to help define and establish its primacy in this new era."

As president and chief operating officer of NBC, Lack oversaw the operations of most of NBC's divisions, including Entertainment, News, Networks, Television Stations, Sales, Broadcasting & Network Operations, and cable networks (CNBC and MSNBC). Prior to that, as president of NBC News since April 1993, he transformed the News division into the most-watched news organization in the world. Today, NBC Nightly News with Tom Brokaw, and Meet the Press are each number one in their time periods. The primetime franchise, Dateline NBC, is the top newsmagazine in key sales demographic categories and a significant part of NBC's primetime programming strategy. He also presided over NBC International and the creation of MSNBC, the joint venture of NBC and Microsoft, and oversaw the primetime programming of CNBC, the nation's number one financial news and information cable network. For four consecutive years, Lack was named the "Most Powerful Person in Television News" by Electronic Media, a leading industry trade publication.

Before coming to NBC, Lack spent much of his career at CBS News, where he created and served as the executive producer of the groundbreaking newsmagazine West 57th (1985-89). He served as the senior executive producer of the landmark CBS Reports for nearly a decade (1978-85), producing acclaimed documentaries such as "People Like Us" (1982), "Teddy" with Roger Mudd, "The Boat People" (1979), "The Defense of the United States" (1981), and "Bittersweet Memories: A Vietnam Reunion" (1981). He joined CBS News in 1976, and the following year became a producer for 60 Minutes.