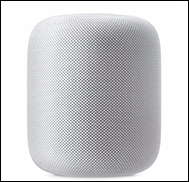 The audio-aware Homepod appears to be a small speaker and includes a built-in Siri virtual assistant who can be controlled with voice commands such as requests to play a specific song or album from Apple Music. As well, the device comes with a “Musicologist” feature that works with Apple Music to handle more complex requests, such as 'what album came out on this day 20 years ago' or 'who is the guitarist on this song.'

Apple priced the new music widget at $349, considerably more expensive than competitors, such as Amazon's Echo which will set you back just $179.

However, Apple maintains that their device will provide superior sound quality to its rivals — the speaker has 7-beam forming tweeters and a 4-inch woofer facing upwards and is built around an A8 microprocessor, the same chip that powered the iPhone 6 plus that will help the device to automatically tune its sound to the environment it's in.

"It's the biggest brain inside a speaker," Apple marketing head Phil Schiller told the crowd at WWDC.

Apple also did not indicate if the Homepod will work with Apple Music's competitors such as Spotify or Pandora, which may be a sticking point with a lot of potential customers. – Staff Writers