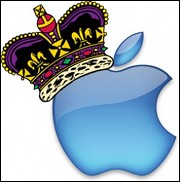 CUPERTINO, CA (Hypebot) – Check and mate. There's no other way to make sense of what just happened. As far as subscription music is concerned, Apple has now cornered the king of every subscription music service. If any of them moves an inch, in any direction, Apple takes/kills their king.

Up until now, every subscription service has played a strategy game – against Apple and each other – and in a spilt second, Apple has changed the game and reminded them that it owns the board beneath them. Once Apple introduced the ability for app developers to charge for in-app content on a subscription basis and claimed rights over a 30% cut, it restructured the subscription music sector.

In the future, when fans discover MOG or Rdio in the App Store, downloads it to their iPod Touch, and tries out the service, Apple may request that companies make it so interested fans can sign up for subscriptions in-app.

If they decide to become paid users in-app, Apple may require companies to let them handle the billing process. For this service, it will take a 30% cut of the profits. The logic behind this, according to CEO Steve Jobs, is that if a user has an iPod Touch and is surfing in the App Store it created, Apple deserves a cut for bringing new subscribers to those apps.

Companies can still sign up users outside of their ecosystem, but the price reflected in the App Store and on their site must be the same. Over at Billboard, analyst Antony Bruno puts this into perspective.

Mobile subscription services already cost twice as much as online-only subscriptions ($10 vs. $5) because the labels charge more in licensing fees for mobile streaming versus desktop streaming.

Mobile music app providers say up to half of their subscriber base join as a result of their iPhone app.

If MOG, Spotify, or Rdio gain traction in 2011 and Apple does start taking a 30% cut of every user that signs up in-app, these services will either have to kill their iPhone app or raise the prices for their mobile app, Bruno reasons. "Either case will severely stunt growth."

Subscription services can't afford to have 30% of their monthly fees go to Apple, as one anonymous source commented, because the "margins that all of us make are smaller than 30%." They argue further that if the labels don't absorb this extra cost all subscription services need to kill their apps in defense, as the main tier of their business model won't be economically viable.

"The bigger question now," Bruno proposes, "is whether this is just Apple's way of taking a cut of a business it helps create by virtue of the iPhone platform's popularity…" Or, and this is where things get interesting, "is Apple knowingly kneecapping other streaming music services in preparation to launch its own streaming music service for the iPhone in the coming months?"

If Apple does take a cut from rival services, it will gain profits from all aspects of digital music.

• If music piracy continues to thrive, Apple wins; it sells the iPod.
• If fans buy music legally, Apple wins; it controls 66% of the market.
• If cloud music takes off, Apple wins; it takes 30% of their rival's profits.
• If Apple starts a subscription service, it wins; the company can position its mobile app as being cheapest and most integrated one in the market.

The best and/or most evil part: Apple will make money off the users that it steals from other services, since it can create a better one, and still take a lion's share of the revenues from those that don't defect – without paying a dime in licensing.

If nothing is done here and Apple does take a 30% cut and the labels don't absorb the cost, rival services can't afford to be in the App Store. Any dramatic growth would be suicide. Therefore, they will have to hike prices, making their main service less appealing to users. And yet, if they leave the App Store, it's still suicide, because half of their grow is be attributed to it. Check and mate.

Music industry meet your monopoly: Apple. The king is dead.