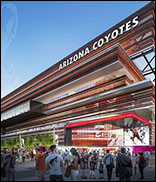 The plan calls for the construction of a 16,000-seat arena that would also include a smaller, 4,000-seat multi-sport arena that would be used for Coyotes practices as well as by ASU athletics and youth hockey teams. The proposed $400 million dollar complex would be completed by 2018 and be located close to the heart Phoenix's population and financial center, the Associated Press reported.

The Coyotes' agreement with developer Catellus Development Corp. sets a June 30 deadline for creating a plan to fund the project and commit to designs for the venue and the surrounding area. The Coyotes have generously offered to pay about half the cost of the new arena, with the rest of the funding coming from public-private funding, according to Coyotes President and CEO Anthony LeBlanc.

The team's proposal would see the public funding for the project come from tax revenues generated from a special tax district around the arena, which would include a proposed luxury hotel and commercial development.

The Coyotes currently call the Gila River Arena in Glendale their home ice. The team signed a 15-year lease agreement with the City of Glendale, but in June 2015, the City Council voted to terminate the agreement, citing a conflict of interest after Craig Tindall, a former Glendale city attorney who helped to broker the original lease deal was hired by IceArizona, which owned the team at the time, just seven weeks after the agreement was signed.

Just a month after terminating the original lease, the Glendale City council voted unanimously to approve a second lease for the team that will keep the Coyotes in Glendale through 2017. – Staff Writers

The City of Glendale still owes $145 million on the team's current home, according to the Arizona Republic. – Staff Writers