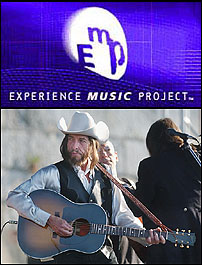 Few performers have reached the status of Bob Dylan — a multi-generational force. Bob Dylan's American Journey, 1956-1966, curated by EMP's Ann Powers, showcases a singular artist as he made history in the throes of social change taking place around the country. The exhibit will include extensive material from the Bob Dylan Archives, EMP's own collection, as well artifacts from private collectors from around the world. The exhibit kicks off a period of renewed examination of this crucial period in Dylan's career that will culminate with a broadcast documentary on Dylan to be directed by Martin Scorsese, and will air in early 2005.

"This is the first time a nationally recognized cultural institution has taken on the telling of Bob Dylan's story," said Matt Ellis of the Dylan Archives. "We are very pleased that Experience Music Project, one of the most innovative music museums in the world, has taken on this important project."

"It's an honor for Experience Music Project to create a major exhibition that's focused on one of the most significant artists of the 20th century and to have the opportunity to work closely with the Dylan Archives to develop it," said Robert Santelli, EMP's Director of Museum Programs. "It's practically impossible to think of popular or roots music in the past forty years without the name Bob Dylan prominently coming to mind. Dylan's sweeping influence on both American music and culture makes him the ideal artist to explore in a major music exhibition."

Bob Dylan's American Journey, 1956-1966 follows him from the industrial town of Hibbing, MN, where he was born Robert Zimmerman, through his debut in the Greenwich Village folk revival, into his massive fame as the man who "electrified" contemporary songwriting, and ends with the making of three of rock's greatest works: Bringing It All Back Home, Highway 61 Revisited, and Blonde on Blonde.

The exhibit will showcase handwritten letters and lyrics and musical instruments as well as capture Dylan's interest in Americana — playing off classic imagery that he has mined in his music: the railroad, the highway, and the carnival. Rock and folk's greatest visual chroniclers, including D.A. Pennebaker, Daniel Kramer, and John Cohen, will be prominently featured throughout the show.

Bob Dylan's American Journey, 1956-1966 will also feature an audio tour and interactive kiosks, as well as extensive education materials available to teachers and scholars across the country. –Bob Grossweiner and Jane Cohen

(CelebrityAccess News Service) — A valuable vintage Gibson 1954 Les Paul "Black Beauty" Guitar owned for many years by singer-songwriter Graham Nash disappeared in a New York City yellow taxicab at approximately 11 PM on the night of October 23. When the guitar went missing, it was in the trunk of a cab located at the northeast corner of West 139 St. and Broadway in Manhattan.

At the time, the instrument was on loan to Nash family friend Kinski Rodriguez of the rock band Madrepore, who was in New York playing a show. Rodriguez also lost other electronics and personal items that were in the trunk with the guitar when the car drove away before he could get his belongings. The incident, which was reported on October 24, is filed with the NYPD as complaint # 2003-030-66146. The yellow cab driver's name was Ramir, and the first two numbers/letters of his I.D. badge are believed to be 2K.

Beyond its monetary value, the Gibson 1954 Les Paul "Black Beauty" Guitar is of great personal value to Nash, who is offering a reward of $1,000 plus tickets to a future Crosby, Stills &Nash concert, for the safe return of the instrument — no questions asked. The serial number of the guitar is #65683. Anyone having information on its whereabouts should send it via the e-mail address: jensencomm@aol.com, and should include details on how they can be contacted. The Nash family is simply interested in having the instrument back, and thanks anyone who can help make that happen. –Jane Cohen and Bob Grossweiner

Comic Christopher Titus To Be Taped Live For Showtime

(CelebrityAccess News Service) — Reinforcing the network's return to comedy programming, Showtime has signed a deal with comic Christopher Titus, who will tape a one-hour special to air later in 2004. The agreement follows the network's recently announced comedy special with Dave Chappelle, also slated to premiere in 2004.

Titus is currently touring the U.S. with his stand-up act, "Norman Rockwell Is Bleeding," which is what will be filmed for Showtime. Titus will serve as executive producer for the special along with Ken Weinstock. –Bob Grossweiner and Jane Cohen

RENO, Nevada (AP) — The comedian Sinbad joined a group of well wishers at a send-off for nearly 100 Nevada Army Guard members who began their deployment in support of the war against terrorism.

While the soldiers waited to check in their duffel bags Sunday at Reno-Tahoe International Airport, the comedian spent some time shaking their hands and telling them how much he appreciated their efforts.

"He was telling us to stay safe, take care and good luck," said Spec. Timothy Carr, of Reno.

Sinbad was preparing to catch a flight of his own after performing Saturday night at a Lake Tahoe resort.

The nearly 100 members of the guard's 321st Signal Company will be deployed to an undisclosed location in Southwest Asia after receiving advanced training at Fort Lewis, Wash.

The company, which installs, operates and maintains digital communication equipment, will remain on active duty for 12 to 18 months.

The 55-year-old rock star, who was honored with a star on the Hollywood Walk of Fame earlier this month, will host the syndicated "Nights With Alice Cooper" starting Jan. 26.

"It'll be sort of an 'Alice's attic,'" Cooper said. "The way to do it is to make this kind of rock n' roll become theatrical on radio, the way I made it theatrical onstage. There will be ongoing stories and characters, but it will be wrapped up in classic rock."

The show, which will originate at Phoenix's KDKB-FM, will air on at least six stations in the Midwest and New England.

Cooper became known for shocking audiences with gruesome concert performances including acts like guillotines lopping off heads and simulated hangings.

Classic Cooper albums include "Killer" and "Welcome to My Nightmare."

BURBANK, CA (AP) — Bob Hope's name appears on schools, a Navy ship and plane, and streets from Palm Springs to his hometown of Cleveland. Now, an airport is named after the renowned entertainer.

Members of the Hope family gathered Wednesday with celebrities and politicians to officially change the name of the Burbank-Glendale-Pasadena Airport to Bob Hope Airport.

The comedian had parked his private plane at the airfield since 1985 and embarked from there on many trips to entertain U.S. troops. Dolores Hope, making a rare public appearance since her husband's death on July 27, told the crowd about waiting for him to return from the South Pacific in 1943.

"Our son Zachary, who was 5, kept saying `goodbye, Daddy.' He didn't know whether his father was coming or going," she said.

The unveiling was scheduled for Dec. 17 to coincide with the 100th anniversary of the Wright brothers' first flight. Hope was born that same year on May 29 in England.

In 1940, Lockheed bought the facility to accommodate its expanding defense work. The airport was sold to the cities of Burbank, Glendale and Pasadena in 1978, which now operate it jointly. The airport handles 5 million passengers a year.