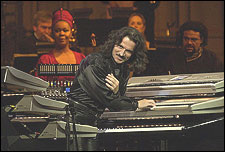 On November 6, Yanni taped his first TV special in seven years and his first ever in America, from the Mandalay Bay Resort & Casino in Las Vegas. It was filmed live from the opening performance of his 55-concert Yanni Live 2004/5 World Tour, which is nationally promoted by Concerts West/AEG LIVE, in association with Danny O'Donovan. His last three television specials were recorded in overseas locations at the Acropolis in Greece, the Taj Mahal in India, The Forbidden City in China and at London's legendary Royal Albert Hall.

The show was a 16-camera production shot on High Definition and included a special Sky Cam, normally exclusive to ABC's Monday Night Football. In addition, over seventy microphones captured the audio for this special event in Dolby 5.1 Surround Sound. The special will be broadcast nationally in 2005 and will be available on HD television, video and DVD. The audio recording will also be the basis for Yanni's next live album following in the tradition of "Live At The Acropolis" and "Tribute."

Yanni's television specials have been the highest rated music pledge events for Public Television over the last decade and his DVD/VHS sales for all specials have totaled over 2 million units, making his live concert specials among the best sellers in the video market.

This show features many of Yanni's classic compositions, including "Santorini," "Standing in Motion," "Until the Last Moment," "Nostalgia" and "Nightingale." It also highlights several popular songs from his most recent album, "Ethnicity," including "For All Seasons," "Playtime" and "Rainmaker," as well as some brand new compositions — "World Dance," "Prelude" and "The Storm." In addition, there will be some behind-the-scenes footage of Yanni's band rehearsals and preparation for this TV special.

WASHINGTON DC (AP) — Trumpeter Wynton Marsalis will star in the premiere of a 90-minute jazz concert narrative he composed – "Suite for Human Nature" – at Washington's Lincoln Theatre on Dec. 10.

There will be two additional performances, Dec. 11 and 12.

The libretto by Diane Charlotte Lampert deals with Mother Nature, Father Time and their children. It tells of the Four Winds coming to the rescue when troubles of the world created by Nature and Time become "almost too much to bear," according to the announcement by the Washington Performing Arts Society, which commissioned the work.