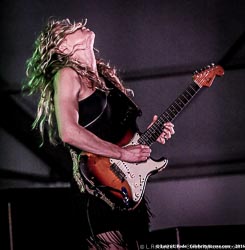 (CelebrityAccess) — With her full Summer tour scheduled and her new album set to release this Summer, Ana talks to us before her performance at Beale Street Music Fest, about touring with the Hendrix Experience, her influences and her new album “Trilogy” released June 4th.

Fresh off playing with the “Hendrix Experience” which showcases the most awesome guitarists across all genres, Ana is the only female to date to join this tour 3 times.

Ana – “ Was a fantastic experience – down to earth guys and my dream tour to play with all these guitarists. Buddy Guy, Zakk Wylde, Johnny Lang, Kenny Wayne Sheppard to name a few (http://www.experiencehendrixtour.com) The experience allowed me to explore my music and go in many different directions. It’s just fun to go back to play the one of a kind music that Hendrix created and that so many attempts to recreate, but have not been able to, to this day. “

As she is currently touring the east coast of the US, Ana is also set to tour to Australia and Europe this year.

Born in Belgrade Ana’s primarily influences span from listening to

Blues at the young age of 3 “earlier than most American people”. With her main roots coming from Delta Blues and Chicago Blues her slide guitar roots come from listening to Robben Ford and the Fusion Guys, being exposed to Elmer James, and of course the “3 Kings’s” -Albert King, BB King, and Freddy King. Additionally, the rock influences such as Stevie Ray Vaughn & Jimmy Hendrix have really help to mold her into the guitar virtuoso she is today.

As her previous albums were more New Orleans style blues and original roots, this new album departs from that style, bringing a fresh feel for listeners to enjoy.

Volume 1 – “ Morning” recorded in New Orleans produced by Grammy Award winner Warren Riker (Lauryn Hill, Carlos Santana), and features her funk style of Guitar. “This album is more of a dance, funk, and soul record meant to get your day started.” Named “Morning” Ana says “when you don’t feel like going to work this gives you the attitude you need to get out of bed and start your day in an Ana Popovic way”

Volume 2 –“Midday” – Recorded in Memphis and Nashville produced by Grammy Award winner Tom Hambridge (Buddy Guy). This Blues and Rock CD was created – “to motivate the listener during a difficult morning to continue their day with vigor. Really rocky – deep blues cuts and a lot of show off guitar” Ana tells CA.

Volume 3 – “ Midnight” – Recorded in New Orleans and produced by, incredible jazz people Delfeayo Marsalis (Wynton Marsalis and Branford Marsalis), one of the top trombonists, composers, and producers in jazz today. “Midnight is a Jazz record for the end of a tough day, you pour a glass of wine and put on a jazz record and just relax.”

Interview, Photos and Story by: Laura L Rode for CelebrityAccess