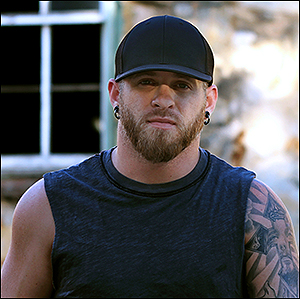 (CelebrityAccess) – SOMEWHERE ON THE ROAD: The rain may’ve come down Friday, but that didn’t stop Brantley Gilbert’s fans – 16,018 strong – from descending on Cleveland’s Blossom Music Center for a night of industrial strength country rocked hard and the BG Nation filling the lawn for two plus hours of the songs torn from the South Georgia songwriter’s life. Up the road in Indianapolis, they were sold out in advance – 22,513 people – packed in at the Klipsch Center, and on a Sunday night outside Pittsburgh, 18,153 loud’n’proud fans at the KeyBank Pavilion sang along to “The Ones Who Like Me,” “Bottoms Up” and “One Hell of an Amen.”

“People who work hard rock hard,” Gilbert said with a smile after Indy, “and when they spend their hard earned money to come out, they wanna feel it. And for me and the guys, well, we wanna feel it, too. I think the folks in the heartland aren’t all that different from the people where I come from – and when you come together for the music, well, it’s gonna get crazy.”

The commonality that Gilbert sees between working people everywhere drives his recent Apple Music spot that has recently been expanded to two minutes – and will air again during ABC’s “CMA FEST” special on Wednesday, August 16 at 8:00P ET. But more importantly, for those fans out on the road, they’re coming together in the name of the music as The Devil Don’t Sleep continues selling out amphitheaters – including Detroit’s DTE Energy Music Theatre (aka the legendary Pine Knob) two weeks before this Sunday’s concert — across America.

Rolling Stone has deemed Gilbert’s unadulterated brio “the soundtrack to Friday night in small towns everywhere.” The Buffalo News concurred, writing of Gilbert’s stop there, “Gilbert brought down the house with a hard-rockin’ night that managed to be wild, spiritual and introspective all in one,” and The Cleveland Scene offered, “Gilbert doesn’t play by Nashville’s rules. While the term ‘authenticity’ gets bandied about often these days, it applies to Gilbert’s music” and the The Cleveland Plain Dealer agreed, saying his latest single, “pretty much conveys the real Gilbert, a down-home Georgia native who breaches no bull. As the song says: ‘The ones that like me love me/And if you don’t probably a good chance I don’t like you either’…”

Noted critic Scott Mervis at The Pittsburgh Post Gazette cites what sets Gilbert apart “But the singer-songwriter from small-town Jefferson, Ga., has distinguished himself with some extra grit, a little more depth and a harder rock edge. In a different era, he would have been more of a Southern rocker, or even a heartland type in the vein of Seger or Mellencamp.”

Even the business people see the gap. Ad Age called his Apple spot, “as heartland-y as you can get. Gilbert and his biker buddies rumbling over a railroad crossing, a motorcycle carving circles in the dirt — underscore the gritty Americana feel.” Mashable concurred, “It looks more like a spot for Harley-Davidson than a tech company known for its pretentious marketing.”

For Gilbert, though, it comes down to the people. Laughing about the sudden critical response, he offers, “You know, I’ve been doing this the whole time. I’m a simple man. I’m honest about where I’ve been, what’s happened in my life. To me, real people living lives know what I’m singing about – and they hear these songs, and they hear their lives, too. It’s why whether people write about us or not, the BG Nation shows up! If you work hard, wanna live your life all the way to the end, we’re your kind of people – and there’s always plenty to go around.”