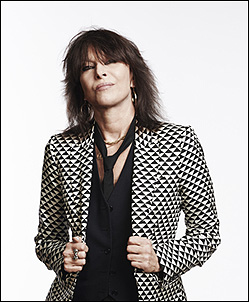 LONDON (AP) — Chrissie Hynde's new record, "Stockholm," is the first in her 35-year career without the Pretenders name on the cover.

But she says it's not so much a solo album — more a band that got away.

"Stockholm" was recorded in the city of its title with producer Bjorn Yttling — of Scandi-popsters Peter, Bjorn and John — and musicians including Joakim Ahlund of Swedish indie band Caesars. Hynde says they worked together as a band, and she harbored hope that the Scandinavians would leave "their wives and their bands and their studios to be in a band with me. But these guys have lives."

The singer from Akron, Ohio, who came to Britain in the 1970s and forged one of the most enduring acts of the post-punk era, pauses briefly. "I'm obviously losing my touch."

Don't count on it. "Stockholm," released Tuesday, is a confident album — slickly produced power pop with a strain of grit featuring a couple of surprising guest appearances. There's Hynde's friend John McEnroe, swapping a tennis racket for a guitar to make a racket on "A Plan Too Far." And there's Neil Young, lending his unmistakable guitar wail to "Down the Wrong Way."

"We had a song that sounded like a Neil Young song, and we kept referring to it as 'The Neil Young Song.' And just to kind of (mess) with Bjorn I'd say, 'We could always get Neil on it,'" she recalled. "But I didn't mean it, of course. … But then the more I said it over the subsequent months, I thought, 'I actually could.'"

Hynde sounds like she's having fun on "Stockholm," which bears traces of both her punk roots and her even earlier love of 1960s rock and pop.

"My real musical background was from AM radio in America," she said. "All that psychedelic stuff that your parents didn't know what they were talking about because it was all about acid trips and stuff. That's what I grew up on."

Hynde, 62, has had some wild times. She lost two founding members of the Pretenders to drug-related deaths in the 1980s. Now she's fit, vegetarian and an outspoken animal-rights activist. But she still yearns for the days when rock 'n' roll was dangerous.

"It is a dying breed," Hynde said. "The whole idea of it was you were living outside the law, it was anti-establishment."

"(Now) you're swept up in this congratulatory Grammy culture. … When I see someone holding their little statue crying, I don't know where to look, I'm so embarrassed."

And yet the Pretenders were inducted into the Rock and Roll Hall of Fame in 2005. Hynde says she accepted mostly because her parents would have been "crushed" if she'd said no.

"But the truth is, it's made rock 'n' roll an establishment. It's turned it into an institution. So if I was 16 now, I don't know what I'd be doing, but probably not trying to get in a rock 'n' roll band."

Hynde is impatient with questions about her role as a female rock pioneer. She says being a woman never held her back in the macho music world.

She has always demanded equal treatment, and got it. She told her record company that she'd happily promote her new album in the media — with one exception.

"I'm not going to talk to fashion magazines. I said, 'If they won't have Lemmy" — Motorhead's gnarly frontman — "don't ask me.'"