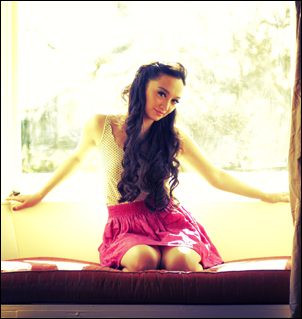 on the brink of something extraordinary. Having released 3 solo albums with Sony

finally created the sound she has be striving for.

Diana’s life story is film worthy, melodramatically so. In 1985, her father died

in the crash of Japan Airlines Flight 123, the deadliest single-aircraft

accident in history. Born a month later, Diana was moved back to London where

all over the world. More recently she has dazzled audiences at Burj Dubai for

Dubai World Cup, 60’000 people at a Khalifa Stadium in Qatar, with Katherine

– So what is this “new sound” all about?

Well, it's all about a long musical journey I have been on to create the music

I've been so passionate to make. It's combining different sounds that I love

with the violin and finding the right balance of electronic and acoustic. It's

about love – love for music!

– How would you describe it?

It's really hard to describe, but I suppose you could say it's a blend of

classical and electronic. It lends itself really well to visuals, because I

– Which genre would you find it in a record shop

Ha! I have no idea… Let's make a new genre. "Modern Classical".

– What do you enjoy the most about what you do?

favourite part, as it means what you've been working so hard at, what you have

put so much blood and sweat into has its chance to connect with the audience.

You hope that your music will mean something to another person, a stranger,

anybody. So when you can see and feel that it is having a positive impact on

someone listening, it's a pretty wonderful feeling.

– What is your goal with your music?

who perhaps wouldn't ordinarily listen to my kind of music, or more "classical"

and instrumental music. I want my music to evoke emotions.. it's really as

– Where did it all begin?

It all began when I was five years old and begging my mother for a violin. When

she finally gave in, I fell in love with the violin and very soon declared that

I was going to grow up and become a professional violinist. Nothing has changed

– What do you want your listeners to get from your music?

whatever journey the music will take them on…

– Originally a violinist, did songwriting come naturally to you?

Not exactly, coming away from doing things the classical way, it was hard to

even think I could be worthy of creating music of my own. It was quite a long

and hard process, but the longer I have been on that path, the more I love it

and find new ways of being creative and writing music. It has been a necessary

part of evolving as an artist and not just being a musician. It's important to

I have no idea, I don't really have one! Once I've finished a piece of music, an

album, a project or a concert, I move on from it quite quickly and want to start

previously. I guess my greatest achievement is when/if my music speaks to

– Are you working on any other projects?

online so people can get to hear the new sound if they want to. It's been a long

journey to this point, but I'm really excited at how things are coming together

and what the next album is hopefully shaping up to be.

– Any Plans for collaborations?

on for a little while. I'm loving exploring a new direction and how our

different influences are coming together and creating something quite

unexpected. It's sounding really beautiful and I can't wait to find out how

people will respond to it!

– What/Who are your Musical inspirations

Kreisler to artists at the other end of the spectrum, like Massive Attack,

Radiohead and Antony & The Johnsons. What they all have in common is that their

music comes from the heart. Music isn't about labels, categories or boundaries.

Good music is good music – a language that we can all understand.