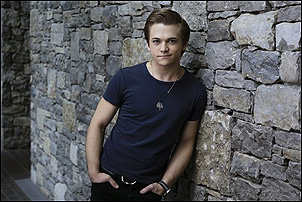 NASHVILLE, Tenn. (AP) — Hunter Hayes may be a platinum-selling, arena-headlining, Grammy Award-nominated country star, but he has all the same questions about love as any other 22-year-old.

He jumps headfirst into those questions with the pull-at-your-heart-strings country pop songs on his new album "Storyline," which he calls his most honest work.

"And you get this record that is very emotional, it's exciting," Hayes says. "It's nerve-wracking."

He shares his own personal journey from music geek to country star with his song "Invisible," an uplifting universal message about individuality and strength.

"My fans have given me a chance to make the music I have always made, but I've only made it by myself in my living room," Hayes said. "Now I have a place where I can be myself, where I can be the geek that loves music on stage in an arena."

Co-written with songwriters Bonnie Baker and Katrina Elam, the song was so personal to Hayes he says he spent nearly two months working on putting it to music, erasing much of his work and then starting over again. He says he never intended or thought "Invisible" would work as a single because it was too personal and serious.

"'Invisible' was something that I wrote to say that I've been able to see that your dreams can come true, and there's no reason not to be yourself," Hayes says.

The Louisiana-born singer has found his initial success in doing things his way. He played all the instruments himself on his self-titled debut album, which earned him four Grammy nominations and led to three platinum-selling singles.

So when it came time to record new music for another album, he wanted to avoid repeating himself.

This time around he was inspired by bands like Tom Petty and The Heartbreakers, Fleetwood Mac and Zac Brown Band to showcase his own band's talent and give a more collective sound to this album. He also paired up composer Paul Buckmaster, who is known for working on Elton John records, with steel guitar player Paul Franklin.

"I wanted that new dimension of having several different people with their own gift of interpretation," Hayes said. "It's opened so many doors for me creatively."