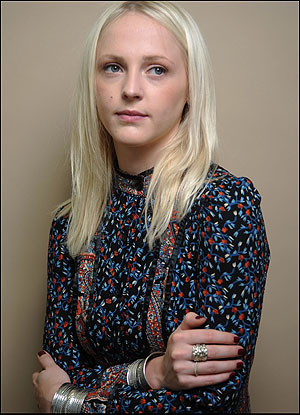 (CelebrityAccess) – Laura Marling returns with a new album Short Movie, to be released through Ribbon Music on March 24th, 2015.

Short Movie is Marling’s fifth album in seven years, a remarkable achievement for someone who has yet to reach her 25th birthday. Recording since the age of 17, Marling's flawless output has established her as one of the most respected artists of her generation. Three of her albums have been nominated for the esteemed Mercury Music Prize and she is a two-time BRIT Award nominee, winning the UK’s GRAMMY-equivalent for “Best British Female Artist” in 2011. That same year she beat out an array of international talent to the title of “Best Solo Artist” at the NME Awards.

Short Movie sees Marling moving into new musical territory and may surprise some of her fans with its prevalence of electric guitar. Along with plugging in for the first time, Marling chose to produce the album herself. She pushed her band to record live and insisted the string players perform "blind", only hearing each track once before recording their parts. The result is a far bigger, bolder and looser sounding album than any of its predecessors.

Following the worldwide success of 2013’s Once I Was An Eagle – which was ranked #20 in Rolling Stone’s 50 Best Albums of 2013 list and at #2 by the New York Times – Marling took some time away from music and began grappling with her nomadic lifestyle. A world away from the windswept farmlands of her Hampshire childhood, Los Angeles and the surrounding desert had a striking effect. She decided to stay a while. “I realized that I hadn’t been in place for longer than two or three weeks since I was 16.” She explains, “I thought: I wonder what will happen if I try and root myself somewhere?”

Settling into her new home on the East Side of LA, Marling toyed with leaving music for a time; she applied to a poetry-writing program and became a certified yoga instructor. Making new friends she chose not to tell people she was a successful musician, or even a musician at all. At the age of 24 – and after eight straight years on the writing/recording/touring treadmill – she sought out a more anonymous existence. “Not that I’m a somebody somewhere else, but I’m very much not a somebody here,” she explains. “And for six months when people asked me what I did I would tell them something else. And it was nice. It was hard, but it was good. And I had nothing, I had to go on actually who I am — which I haven’t had to do for a long time, since I was 16.”

Short Movie is the result of that extended period of reflection and a conscious attempt to change routine. Spending more time alone than she’d ever imagined meant a lot of reading and some very solitary trips to Joshua Tree. Hiking in the canyons, and exploring the work of Rilke, Chris Kraus and Jodorowsky, she eventually found her way back to songwriting. The result is her most intense and vital work to date; the songs encompassing doubt, magic, hope, humanity, salvation, rage, peace, place and being alone.

Marling co-produced the album with her drummer Matt Ingram and studio engineer Dan Cox. Recorded at Urchin Studios in London, she was joined by her longtime collaborator and friend Ruth De Turberville on cello, Nick Pini on bass and Tom Hobden.