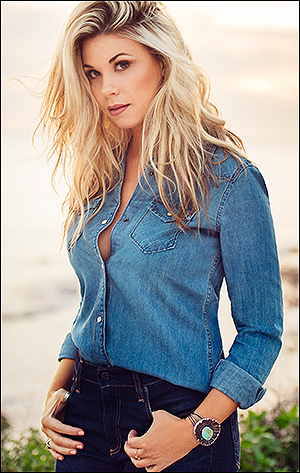 (CelebrityAccess) – Country music singer/songwriter, Sandra Lynn’s newest single, “Hey California,” was exclusively premiered Wednesday, May 31, through Radio Disney’s Country Spotlight. “Hey California” is now being featured on Spotify and also available via iTunes, Google Play and all other digital platforms. The single, co-written by Lynn and Dave Brainard (Brandy Clark), who also produced the track, describes a picture-perfect day on the West Coast and all that comes with it—sunshine, romance, even a flair of mystery. Download the single on iTunes here: smarturl.it/HeyCalifornia

Although being a California native, Lynn has always had a Nashville heart and been pulled toward country music and its contagious, heartwarming ability. Mixing its tradition with her own cotemporary flair, “Hey California” is the first track to be released from Lynn’s highly anticipated debut album that will be out later this year (produced by Ben Fowler with additional tracks by Brainard). Lynn has also already wrapped the filming of the single’s official music video that will be released in the coming weeks.

Lynn comments, “I feel like this song is such a strong identity piece for me,” continuing, “It represents some of my earliest influences, like the Beach Boys and Sheryl Crow, and it captures my love for country music and my roots as a California girl.”
Nowadays, Lynn has been busy writing, putting her lyrics to melodies, recording and gearing up for the full-length album release. Growing up in a neighborhood full of horses, riding trails, and ranch-style homes, channeling her inner West Coast roots, the singer/songwriter’s contemporary country sound radiates a soulful California vibe that is echoed throughout her songwriting. Lynn pushes her music to strike a chord with people, to get them dancing or through a hard time—letting her lyrics speak for themselves.

Since the release of her self-titled EP in 2014, produced by Rascal Flatts' Jay DeMarcus, Lynn has been on the road opening for Country music giants such as Josh Thompson, Kenny Chesney, Cole Swindell, Kenny Rogers, and Jana Kramer. Her singles “Afterparty” and “Bar Hoppin’” produced by Ross Copperman in the Fall of 2014, received substantial airplay on Sirius XM, with “Bar Hoppin’” featured on Spotify’s ‘New Boots’ country playlist, and her music video for “You Belong” (directed by Trey Fanjoy) being featured on major country networks such as CMT, GAC, and the Country Network.

Sandra Lynn was in Nashville celebrating her single release by performing at several events during CMA Music Fest including – The Valentine Nashville on June 7, Wildhorse Saloon on June 11, and Rock Bottom’s rooftop on June 11. She was also signing autographs and meeting with fans at Fan Fair X in the Music City Center on June 9. She also appeared and performed on Fox 17’s morning show on Friday, June 9.