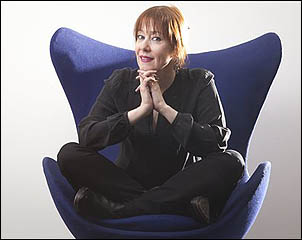 NEW YORK (AP) — The title of Suzanne Vega's new disc, "Tales From the Realm of the Queen of Pentacles," sounds like an unreleased Yes album from around 1977.

"Is that why people keep going, 'It's very prog rock,'?" Vega said with a laugh. "I don't know what they're talking about."

The mouthful moniker is a reference to tarot cards and the spiritual world, the latter an overarching theme to her first album of new material in seven years. The typically well-crafted set has songs that touch upon a stoic laborer with a shameful secret, a loved one's death and the resurrection of a political figure who sounds like Nelson Mandela but was written with Vaclav Havel in mind.

Vega totes an acoustic guitar and her image as a folkie songwriter dates back to her biggest hit, "Luka."

Yet it's not really accurate, and hasn't been for some time. She's quite adventurous musically, and her new disc samples 50 Cent's "Candy Shop," name-checks Macklemore and lays down some of her hardest-rocking tracks. Producer-guitarist Gerry Leonard said the Black Keys and White Stripes inspired the arrangement for the catchy "I Never Wear White."

After writing a folk song like "Gypsy" when she was 18, "I felt that I had done that very well and I wanted to go on," said Vega, who's now 54. "I thought that's what you're supposed to do as an artist, go where your inspiration takes you and go where your imagination takes you. I don't feel like I'm experimenting for the sake of experimentation."

She's always had a strong collaborator, in this case Leonard, an affable Brit who's also David Bowie's music director. Her rhythmically thrilling work with producer, now ex-husband, Mitchell Froom in the 1990s was a landmark.

But don't get the wrong idea.

"When I was with Mitchell sometimes people felt like he overshadowed me and I said, 'No, I hired him to do exactly those things,'" she said. "I'm the source here — not him. He did what I wanted, thank you very much. It's not his expression, it's mine."

Same thing with Leonard. Although he toured with her as a guitarist, Vega was reluctant to hire him as a producer, considering his music too ethereal for what she wanted. His work on "I Never Wear White" proved to Vega he could do the job.

"Some people have gaps in their catalog with Suzanne," Leonard said. "The thing with Suzanne is there has always been a very modern slant to her writing. There are so many songs that are almost like modern art, if you think of them in a visual sense. They're not your straightforward paintings — a landscape or a portrait. It has this edge to it."

After recording for major labels since she was 24, Vega puts her music out herself now. During the past few years she released re-recordings of past work on thematic discs, both to reacquaint fans with the music and test a new distribution system.

She still needed a push to get going again.

"I spent most of my life making records with a strict structure," she said. "Now suddenly I had to create my own structure. If it wasn't for Gerry Leonard calling me on the phone and saying, 'Hey, I need the work,' it would have been another three years. … People would have completely forgotten about me."