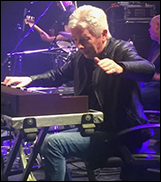 BELFAST, Ireland (CelebrityAccess) — Patrick Fitzpatrick, a veteran keyboardist best known for his work with Aslan, but who also performed with Something Happens, The Blades, and Van Morrison among numerous others, has died after a battle with cancer. He was 60.

"We are saddened to let you all know that our good friend and keyboard player Patrick Fitzpatrick (Fitzy) passed away peacefully this morning," A spokesperson for Aslan wrote in a post on the band's Facebook page.

The band noted that Fitzpatrick had played with them as recently as two weeks ago during a performance at the Cork Opera House, adding that he and his wife joined them for drinks after the show.

In a tribute to Fitzpatrick, fellow Aslan member Christy Dignam told the Irish Sun that Fitzpatrick's passing had "left a huge hole behind in our lives, both as a musician and a friend".

"It wasn't just music; Fitzy was a lovely human being. He played with such feeling," Dignam added. – Staff Writers