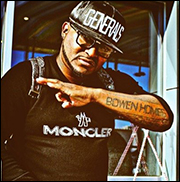 ATLANTA (CelebrityAccess) — Atlanta rapper Carlos "Shawty Lo" Walker, who achieved hits both with rap group D4L and later as a solo artist, died on Wednesday in a car accident in Fulton County, Georgia. He was 40.

Shawty Lo's manager Johnnie Cabbell used the rapper's Twitter feed to confirm his death, writing: "My brother has passed he is no longer here but his spirit, his kind heart, and his music will live on Long live Shawty Lo King of Bankhead"

While initial reports suggested a possible hit and run, police later confirmed to the Atlanta Journal-Constitution that it was a single car incident. According to police, Shawty Lo's white Audi was driving south on I-285 when the vehicle went over a guardrail, hit two trees and burst into flames. Walker was ejected from the vehicle and killed, while his three traveling companions received non-life-threatening injuries, the AJC said.

Shawty Lo was a founding member of the Atlanta-based southern hip hop group DL4, (short for down for life) who recorded the chart-topping 2005 hit "Laffy Taffy." The group's debut LP, "Down For Life" (2005) also found success on the charts, peaking at #22 on the Billboard 200, but that success was short-lived and the group parted company the following year.

Shawty Lo then launched a solo career, scoring another top 40 hit with "Dey Know," from his 2008 album "Units In The City," which peaked at #14 on the Billboard 200 and won Shawty awards for Track of the Year and Rookie of the Year at the 2008 BET Awards.

In 2011, Shawty Lo signed a distribution deal for his label D4L Records with 50 Cent's subsidiary label G-Unit South, but he would never release another album of his own material.

In 2013, Shawty Lo filmed a controversial reality television project about the eleven children he had fathered with ten different women. However, the show never made it to the airwaves after the Oxygen Network decided stop development of the project after "reviewing casting." – Staff Writers