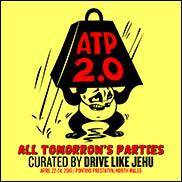 MANCHESTER, UK (CelebrityAccess) — Just a month before the festival is due to take place, organizers for All Tomorrow's Parties Drive Like Jehu event announced that they are changing venues.

Originally slated to take place at Pontins holiday camp in Prestatyn, North Wales on the weekend of April 22-24, the three day festival will now take place at the Victoria Warehouse in Manchester, approximately 65 miles distant.

According to a notice posted by organizers, the change of venue was dictated by Pontins campground management who felt that the festival would have too much of an impact on family campers who were not attending the fest.

"As a result of this, we feel that it is necessary to move our event from Pontins Prestatyn – in the absence of a suitable venue in the Prestatyn area – the festival will now be taking place at the Victoria Warehouse in Manchester. We tried to find the best place that would ensure the least disruption to our customers' travel plans, and also a space in which would compliment the visceral energy of Drive Like Jehu and their hand-picked line-up. Victoria Warehouse is a unique and iconic space situated in the heart of Manchester with the perfect set up for this event," the post said.

The change wasn't warmly welcomed by all prospective attendees, many of whom took to the festival's Twitter page to express their chagrin.

"you lot genuinely need to be banned from putting on shows. Constantly fucking people over," wrote one irate fan.