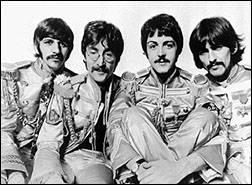 (CelebrityAccess MediaWire) — The Vocal Group Hall of Fame has completed its seventh annual voting process determining the 2004 Inductees. The Beatles, Everly Brothers, Alabama, The Penguins and The O'Jays leads the 17 enshrined groups. Votes were received from the induction committee, inducted artists, readers of Goldmine Magazine as well as thousands of internet voters from over 15 countries around the world. The lifetime Achievement Award, known as the Harmony "Harmy" Award, are given to original members of vocal groups that performed on the groups hit records.

The Vocal Group Hall of Fame honors the greatest vocal groups of the world. It presents, promotes and reserves the music and memories of vocal groups by displaying their memorabilia in a 30,000 square foot world-class museum. Over 100 exhibits make up this national music treasure dedicated to the artists that created pop music.

What makes this Hall of Fame so different and important is that the foundation is operated and governed by the inducted artists. The artists now have a non-profit foundation, organized clubhouse, museum and theatre which provides in-house production services allowing the artists to produce their own concerts, tours, records, video, radio, audio programs and more. The artists have contributed over $1.5 million worth of performances at last year's inductions to help the project.

1950's The Cadillacs, The Crests, The Dells, The Diamonds, The Jordanaires, The Penguins

1960's The Beatles, The Marvelettes, The O'Jays, The Ronettes, The Tokens

1970's The Doobie Brothers, The Stylistics

Adams is known for "Nixon in China," a modern opera based on President Nixon's historic visit to China in 1972, and "The Death of Klinghoffer," which debuted in 1991, six years after American tourist Leon Klinghoffer was shot by Palestinian terrorists on a hijacked cruise ship and hurled overboard.

The 57-year-old composer was awarded the Pulitzer Prize in music in 2003 for "On the Transmigration of Souls," a composition commemorating the victims of the Sept. 11 terror attacks on the World Trade Center.

"It comes as both a surprise and a delight to know that my music is so highly regarded," Adams said in a statement. A native of Worcester, Mass., he is presently a composer in residence at Carnegie Hall in New York.

The Chicago Symphony Orchestra will perform one of Adams' works, and he'll spend four weeks on Northwestern's campus to meet with students and faculty members.

According to Northwestern, a three-member committee selected Adams for "his fusion of a wide range of styles into a voice entirely new and distinctive, and for his connection to and reflection of the world around us."

"He's one of the major composers of our time," Northwestern music school dean Toni-Marie Montgomery said. "It's unusual that composers of a certain era will make some type of social commentary about events in their own lives and Mr. Adams has done that. He's also a great example that music is a universal language."

The prize, which was established last year, was made possible through a gift from the late Erwin E. Nemmers and Frederic E. Nemmers.

The British tabloid The Sun reported that the Boomtown Rats' singer had teamed up with U2 frontman Bono for "Live Aid 2," and that British Prime Minister Tony Blair was backing it. The report even had the supposed lineup: Radiohead, Coldplay, Oasis and Robbie Williams.

Geldof said in a statement he told The Sun it was not true. He said the report undermines the efforts of those who are concerned with poverty in Africa.

"However, if the Prime Minister wants to organize a Live Aid Two, then good luck to him," Geldof said.

In 1985, "Live Aid" concerts to benefit starving people in Africa took place in London, Philadelphia and other cities. Geldof organized the shows, which featured dozens of top entertainers.

It's estimated more than 1.5 billion people either watched "Live Aid" on television or listened to a radio broadcast.

Hawaiian Music May Get Grammy Category

HONOLULU (AP) — Hawaiian music is doing swimmingly with listeners, and now it's is ready to catch the big one: the Grammy. The genre will have its own category for the first time next year if the National Academy of Arts & Sciences approves.

The academy's Board of Trustees already has given its OK for a Best Hawaiian Music Album category, according to a chorus of state officials, including Gov. Linda Lingle.

Calls to trustees, who were meeting on the Big Island, went unanswered Friday afternoon. An official with the recording academy said he expected an announcement next week.

Still, those who love the music of the islands already were celebrating.

"It's a remarkable day," said Jon de Mello, who has lobbied for the Hawaiian category for years as founder of Mountain Apple Company, one of the largest Hawaiian music labels. "It's going to let the public, for once, really see the depth that Hawaiian music really has."

The governor said the new recognition for Hawaiian music "will bring much deserved attention to our multitalented performers and help expand our local music industry."

Hawaiian albums already are eligible for Grammys, primarily through the traditional folk and contemporary folk awards. But an individual category would give it a new level of exposure.

The possibility of a new category is the result of more than 20 years of grass-roots efforts. The call for a Hawaiian category gained new momentum in the last few years, with members of the recording academy working with artists and record labels in Hawaii to help them organize their proposal.

The most debated aspect was the definition of what type of music the category would honor. Some members of the local music industry wanted the category to honor albums recorded entirely in the Hawaiian language. Others believed any releases from the islands should be considered.

The campaign to add a Hawaiian category followed the lead of a similar American Indian campaign. Recordings from the Native American genre earned their own category in 2000 after eight years of effort.