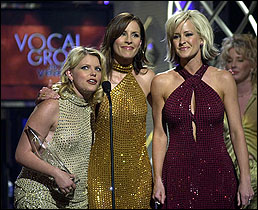 Because of their outstanding accomplishments in creating music videos, The Dixie Chicks have been named the first recipients of the CMT Flameworthy
Video Visionary Award and will accept the award during the live telecast on
June 12 at 9:00-11:00 PM, ET on CMT: Country Music Television.

"We know that music videos are instrumental in bringing our music to the
fans and we take making them very seriously. There aren't any videos we've
done that we haven't been completely involved in the creative process," Dixie Chicks'
Martie Maguire told CMT. Adds Dixie Chicks' Natalie Maines, "CMT and music videos helped
us a lot in the beginning as far as face, name and song recognition. Now
it's not so much that we have to make a video, it's like we get to make a
video."

"The Dixie Chicks nail it every time," said Chris Parr, Vice President,
Music and Talent, CMT. "Before the public knew them very well, their image
that was seen in their music videos was an invitation to listen to their
music. They backed it up with great musicianship and performances. I
believe that is one of the great secrets of the Dixie Chicks' phenomenal
success."

won entertainer of the year for the fourth straight year at the 23rd annual W.C. Handy Blues Awards.

Sam Phillips, who founded Sun Records in Memphis and signed Elvis Presley to a recording contract, was given a lifetime achievement award.

The awards are named after the composer of "St. Louis Blues," who is known as "the father of the blues."

was officially unveiled on the site of the original and legendary Harlem nightclub, the Savoy Ballroom at 141st Street and Lenox Avenue in New York City, on May 26. The plaque reads:

"Here once stood the legendary Savoy Ballroom, a hothouse for the development of jazz in the Swing Era. Visually dazzling and spacious, the Savoy nightly featured the finest jazz bands in the nation, and its house bands included such famous orchestras as those of Fess Williams, Chick Webb and Tedd Hill. The great jazz dancers who appeared on this block-long floor ranged from professionals like Whitey's Lindy Hoppers to everyday Harlemites. During a time of racial segregation and strife, the Savoy was one of the most culturally and racially integrated of institutions, and its fame was international. It was the heartbeat of Harlem's community and a testament to the indomitable spirit and creative impulse of African-Americans. It was a catalyst for innovation where dancers and musicians blended influences to forge new, wide-spread and long-lasting traditions in music and dance. Whether they attended or not, all Americans knew the meaning of 'Stompin' at the Savoy.'

Association (JJA) Jazz Awards 2002, the sixth annual presentation of honors to jazz musicians and their supporters by the organization representing more than 400 writers, broadcasters, photographers and new media professionals worldwide, has issued its list of nominees in 38 categories of achievement, as well as grandees selected by the JJA board for discretionary honors. The awards will be handed out June 19 at the Jazz Standard in New York. Soupy Sales will serve as master of ceremonies.

The category most pertinent to CelebrityAccess is Events Producer, and the nominees are

Jazz Institute of Chicago; and

Odyssey of the Mind

Blue Man Group was selected as this year's recipient because of their bold creativity. Similar to participants in the Odyssey of the Mind, Blue Man Group uses art, humor, and originality to amaze audiences. Each shows a stretch beyond the imagination.

The Odyssey of the Mind is an international problem-solving program for students from kindergarten through college. World Finals is the culmination of a year of hard work for participants. The four-day event will be held this year from May 22-25 at the University of Colorado at Boulder.

Awards were given out in 15 categories, ranging from dance to hip hop and rap. Winners were selected by MTV's Japanese viewers.

Among the winners was Ayumi Hamazaki, a Japanese singer whose popularity is spreading through Asia. Hamazaki won the top female honors.

"I was really nervous," Hamazaki said. "I'm just happy to be here."

The Backstreet Boys, who were not present at the ceremony in downtown Tokyo, were selected as the best group of the year. Japan's Chemistry won the top pop honors, and the British band Oasis won for best live performance.

The Japan event follows similar annual efforts by the all-music network throughout Asia to promote local stars. Other awards it has produced include the MTV Asia Awards, held in Singapore, the MTV Mandarin Awards in Taiwan and MTV Penghargaan in Indonesia.