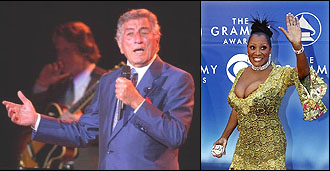 The National Academy of Popular Music/Songwriters Hall of Fame, the organization dedicated to recognizing the work and lives of those composers and lyricists who create popular music around the world, will have its 34th annual induction and awards dinner June 12 at the Marriott Marquis Hotel in New York. Patti LaBelle will receive the Lifetime Achievement Award. The Towering Song will be awarded to "I Left My Heart In San Francisco," written by George C. Cory Jr & Douglass Cross and published by Colgems-EMI Music Inc. The Songwriters Hall of Fame is presenting a new award, the "Towering Performance Award" to Tony Bennett for his memorable rendition of this year's Towering Song, "I Left My Heart In San Francisco." The Towering Song Award goes to the writers and publishers of the song, while the Towering Performance Award is given to the artist who has done the quintessential performance on that song.


"For our first presentation of this award," says SHoF chairman/CEO Hal David, "we feel that Tony Bennett is the perfect choice. Tony Bennett is a songwriter's singer, who has recorded outstanding and unforgettable interpretations of many pop songs which have become standards. He is one of the best examples of the true marriage of song and singer, and all of us at the Hall of Fame look forward to applauding his unique artistry."

Presenters and performers for this year's event include Wynonna Judd, Ray Charles, Pink, Billy Joel, Ben Taylor and Berry Gordy. This marks the second of a multi-year run with legendary music producer Phil Ramone as executive producer and producer. Phil Ramone Television is also producing the televised special of the event, which will initially be broadcast the Bravo network again this year, premiering on July 9 at 9:00 PM ET/PT.

ASCAP staged its 20th Annual ASCAP Pop Music Awards on May 20 at the Beverly Hilton Hotel and presented awards to the songwriters and publishers of the most performed songs in the ASCAP repertory for the 2002 ASCAP survey year (October 1, 2001 through September 30, 2002).

Puddle of Mudd's Wes Scantlin and Doug Ardito, along with co-writer Jimmy Allen, were honored for Song of the Year for their smash hit "Blurry."

ASCAP was established in 1914 and is the world's largest performing rights organization, with over 150,000 active composer, lyricist and music publisher

MEMPHIS, TN (AP) — quot;They cut my lights off this mornin'. They set my furniture outdoors.

"I was listening to the weatherman a while ago and he said it's going to rain or snow. … Oh Angel of mercy, a little mercy is all I need."

Memphis calls itself the "Home of the Blues," and that's not just a Chamber of Commerce slogan — not entirely, anyway.

The music that came to be called the blues was born on the sharecropper farms and in the juke joints of the rural South. But Memphis was the first big stop for blues pioneers such as Muddy Waters and Howlin' Wolf as they sought to escape the poverty of the Mississippi River Delta.

And it was also the first place anyone put the blues to paper, publishing it as sheet music and passing it on to musicians and music lovers everywhere.

The writer was W.C. Handy, author of "Memphis Blues," "St. Louis Blues" and hundreds of other songs.

Now, the top awards for blues performers are called "Handys," and are given out by The Blues Foundation of Memphis. "Handys" are awarded in 25 categories for "traditional" and "contemporary" blues artists.

This year's annual awards concert will be held Thursday at Memphis' historic Orpheum Theatre beside Beale Street. The concert, which will attract top blues performers from around the world, will be headlined by Solomon Burke.

Congress has designated 2003 as the year of the blues, and Public Broadcasting Service will broadcast a major film series called "The Blues" beginning in the fall.

For the fourth year, the Handy concert also will be filmed for broadcast on PBS stations across the country.

Handy, a band director and cornet player born in Florence, Ala., had traveled the country with black minstrel shows before he came to Clarksdale, Miss., in 1903 to lead a band called the Knights of Pythias. He quickly became intrigued by the raw, gritty music of the region.

The foundations of the blues reach back to the first days of African slavery in America, but it passed along to new generations only if they heard it performed live.

In 1909, Handy was drawn to Beale Street, the musical Mecca of the Mississippi Delta, and in 1912 he published his first blues creation, "Memphis Blues." In 1914, he published "St. Louis Blues," which became his most famous blues piece.

Handy formed a publishing house in Memphis called "The Home of the Blues."

"And that's why that term has come to be applied to Memphis as a city," said David Evans, a University of Memphis music professor.

In the early 1900s, Beale Street was the cultural and business center of black life for the region. Rural residents came to Beale to shop, mingle, see and be seen — and to be entertained.

"Blues artists came up from Mississippi on Highway 61. They came over from the Arkansas delta. Memphis was the place to go," said Pat Mitchell of the Blues Foundation. "It's like stars being drawn to Hollywood. If you wanted to make it in the blues, you came to Memphis."

Many of the blues artists moved on to Chicago, Detroit and other Northern cities drawing former Southern farm workers displaced by the mechanization of agricultural.

"Chicago is a blues capital, too. It was in Chicago that the blues were electrified," Mitchell said. "But had Muddy Waters not been in Clarksdale, Miss., first, he never would have made it to Chicago. And it was a journey for him to make it. He came to Memphis and then went to Chicago."