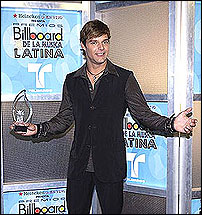 Miami – April 21, 2003 –On Thursday, May 8th, Ricky Martin, Chayanne, Pilar Montenegro and Intocable lead the line-up of Latin artists who will perform at the 2003 Billboard Latin Music Awards, from the Miami Arena in Florida. They will be joined by Special Guest star Armando Manzanero and artists Tito Nieves, Robi “Draco” Rosa and Albita, who will join as Presenters. Latin music’s most prestigious awards show is produced and will be broadcast by Telemundo on May 11 beginning with the pre-show at 7PM ET/PT and the awards show at 8PM ET/PT.

International superstar Ricky Martin is about to return and his performance at this year’s Awards will give viewers a small preamble to the launch of, Almas Del Silencio, his first all-Spanish-language album in more than five years. Another well renowned music sensation from Puerto Rico will also take center stage at this year’s event. Known for his outstanding performances, Chayanne, who’s up for three awards for his album “Grandes Exitos” and the song “Y Tu Te Vas” promises a spectacular show.

Pilar Montenegro’s Album “Desahogo,” and the song “Quitame Ese Hombre,” ranked her at the top of the list of finalists, is up for awards in seven categories. The Mexican singer and actress’ popularity has soared, and her musical talent and beauty will be yet another highlight of the evening. Finally, Intocable, one of the most influential groups in Tejano music, will delight fans with their famous blend of Tejano and Norteño. Their 8th album “Sueños” and the track “El Poder de tus Manos” are up for awards in two categories.

Mexican singer and composer, Armando Manzanero, will join the show as Special Guest, Billboard honors his extraordinary career with the Hall of Fame Award, for outstanding long-term artistic merit and for expanding the boundaries, promotion and knowledge of Latin music. Finally, Salsa music icon Tito Nieves; eclectic artist/producer and painter, Robi “Draco” Rosa; Cuban singer and composer, Albita and Bacilos, the musical trio known for their innovative fusion of rhythms, will also take the stage to present some of the Awards.

LOS ANGELES (AP) — John Williams can soon add a new award to his collection of Oscar, Grammy, Emmy and Golden Globe trophies — that of Olympic Order.

The prolific composer, who wrote the theme song for four Olympic Games, was to receive the International Olympic Committee's highest honor during a ceremony Thursday night in Los Angeles.

He has composed about 80 films scores and won Oscars for his work on "Star Wars," "Schindler's List," "E.T. The Extra Terrestrial," "Jaws" and "Fiddler on the Roof." He also has two Emmys, three Golden Globes and 18 Grammys.

Williams, 71, is composing a work for the Los Angeles Philharmonic and will conduct it in October when the downtown Walt Disney Hall opens, his spokesman, Jamie Richardson, said Wednesday.

WASHINGTON (AP) — Travis Tritt has a new award, this one from the Department of Veterans Affairs. Under Secretary for Health Dr. Robert Roswell presented Tritt with a Public Service award from the VA in a ceremony in Washington Friday, in gratitude for all the singer has done for servicemen and women.

The award is for his longtime support of veterans and veterans issues, and for raising the public's awareness of the VA and the veterans they serve. Tritt recently visited troops and their families at Fort Riley, Kan., and Fort Bragg, N.C., as the troops prepared to deploy to Iraq.