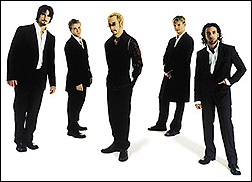 The Backstreet Boys will resume their "Black & Blue World Tour 2001" Aug. 24 in Milwaukee, Wisc. with four additional dates included in their itinerary. The tour will wind down Oct. 20 in San Diego. The tour was anticipated to resume Aug. 7, but band members wanted to give AJ McLean enough time to fully recover from his rehab.

"AJ's initial treatment is going very well," said group member Kevin Richardson. "His doctors have suggested it would be in AJ's best interest to take an additional two weeks in transitional care."

"We've spent some time with AJ recently and he, along with the rest of us, is excited to return to our tour on Aug. 24," added Brian Littrell.

Howie Drough said: "We are thankful for the outpouring of understanding and respect that has been given to us from the media, our peers and fans around the world through this difficult time."

"We truly want to thank our fans for standing with us through this," said Nick Carter. "And we know that it will be worth the wait for them to see the five of us back on stage."