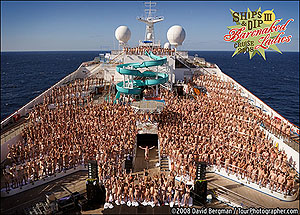 THE BOUNDING MAIN (CelebrityAccess MediaWire) — A photographer working a recent concert cruise had an opportunity to provide some exposure for a group of Barenaked Ladies fans and took a few moments to share his story with CelebrityAccess.

This was actually the second naked cruise photo I've done with Barenaked Ladies. It all started last year before their first fan cruise, Ships and Dip, on the Carnival Legend. I believe it was originally the band's idea to do a very special photo with their fans on the boat, but it was BNL's tour manager Craig "Fin" Finley who kept the idea alive in the planning stages.

I had already spent some time touring with BNL, making photo prints available for their fans through my company TourPhotographer.com when they asked me to come aboard to document the cruise.

For last year's cruise, it was announced ahead of time that I was going to shoot a naked photo on the first full day at sea. Anyone who wanted to be in the picture was to show up on the lido deck wearing a stateroom bathrobe and nothing else. The only thing they could have in their pocket was a room key. No cameras, cell phones, etc. We had security at all the entrances since spectators not allowed. If you were there, you were going to be naked.

Since we'd never done this, I had absolutely no idea how many people were going to show up. If it turned out to be just 10 guys and the band, that would have been creepy.

At shoot time, I was pleasantly surprised as we had nearly 600 people in bathrobes on the deck. The resulting 8X10 photo was available for sale only on the cruise so you had to be on the ship to get a print.

After the picture last year, all of the talk was about how much fun everyone had. Many people who chickened out said that they wished they had done it and if the chance came up again they would participate.

So I knew we'd have a big crowd this year for Ships and Dip III.

(This was called #3 because the band said Ships and Dip II could have never lived up to the first. So they skipped it.)

The rules were the same. No cameras or spectators. This was a different ship (the Carnival Victory) and Fin, who had scouted it out months earlier, realized the multi-layered sunbathing decks made for a perfect "stadium style" setup.

He sent me some snapshots from that scouting trip and I was able to figure out the best place to position myself for the shoot. However, the ship was retrofitted after that and when I went online to look at the deck layout, I noticed they had installed a giant LED monitor for poolside "drive-in" movies. It was placed exactly where I was planning to stand for the photo.

My first job as soon as I got on board was to figure out how to make this work. I could shoot below the screen, but it wouldn't be as dramatic an angle and the ocean wouldn't be visible. I had to get above the screen somehow. Lying down on top of it was not possible because of liability concerns. I jokingly asked how tall a ladder they had on the ship. When they said "12 feet" I figured it was worth a shot.

For the next 20 minutes or so, I watched two Carnival employees make their way up the steps all the way to the top deck with a 12 foot ladder. They held the ladder for me and I worked my way up as high as I thought I could comfortably balance while shooting. It was perfect as I could just barely see over the back of the screen.

As everyone filtered in wearing their robes, I was in communication with Fin on the radio and he talked to the crowd over the PA. I moved a few people around and it took a while to get everyone in place.

The coupe de grace was that I put juggler and entertainer extraordinaire David "Checkerboard Guy" Aiken right in the middle on his unicycle.

When we were all in place, the band came in and took their position under the gazebo in the middle of the photo. Then all the robes were dropped and Aiken somehow got on his unicycle. I pumped my fist in the air and Fin encouraged the crowd to be rowdy. Everyone was naked, after all!

The band, as always, seemed to enjoy themselves. Ed Robertson held onto the gazebo roof and happily swung both legs in the air.

Fin said he would count to 10, which he did very, very slowly. It was probably about a minute until I told him that I was done.

I counted the photo releases afterwards and there were 945 naked bodies.

All the fans I talked to said that they had a great time and they weren't self-conscious at all. The only awkward moment was after the shoot when everyone had to bend over to pick up their robe! – CelebrityAccess Staff Writers