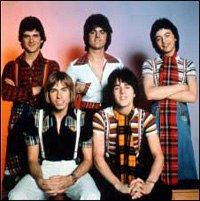 NEW YORK (CelebrityAccess MediaWire) –The Scottish pop/rock band Bay City Rollers has filed suit in the United States District Court in New York for losses they have suffered from Arista Records' breach of contract and fiduciary duty. The suit asserts that Arista has failed to account for or pay any royalties to the band for more than 25 years, despite the worldwide sale of millions of albums, compact discs, merchandising and multimedia licenses, downloads, ring tones and other recordings.

The Bay City Rollers, also known as the "Rollers," were the UK's biggest selling global act in the 1970's, gaining massive popularity around the world with their clean-cut image, distinctive plaid outfits and upbeat pop hits. For a period of time known as "Rollermania," they enjoyed sell-out tours, hit records and even had their own weekly television series in both the U.S. and UK. At the height of their fame, comparisons to the Beatles' earlier popularity were not uncommon. In total, the Rollers released eight original albums and numerous greatest hits and compilations, including five straight gold records and six singles that made the Top 40 on the U.S. hit charts. Among their many hits were Saturday Night, I Only Want to Be With You and Bye Bye Baby. As proof of their ongoing popularity, Arista's most recent compilation, called Absolute Rollers — the Very Best of, hit the Top 10 on the UK charts within the last year, and a new Collections CD is due to be released shortly.

"The Rollers have had remarkable success and staying power over the last 30 years," said Joshua Krumholz of Holland & Knight, lead counsel for the Rollers. "To this day, Arista Records is still successfully exploiting their recordings in the U.S. and around the world. Despite that success and Arista's many assurances over the years that it would pay the band, Arista has simply refused to do what its own contract requires it to do."

According to the terms of that contract, Arista must account for and pay royalties to the band twice a year with obligations dating back to the 1970's. While Arista has continually admitted its contractual duty to account for and pay the group the royalties due them, it has repeatedly come up with excuses to avoid payment or to even account for actual sales. The band projects that tens of millions in royalties are due them under their agreement with Arista.

"Through this lawsuit, we intend to secure the royalties owed to the Rollers for the huge commercial success of their music," said Krumholz. "They have waited long enough." — Bob Grossweiner and Jane Cohen