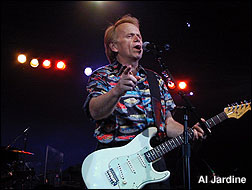 Original Beach Boy Al Jardine filed a lawsuit June 29 against his former bandmates, Mike Love and Brian Wilson, in Los Angeles Superior Court for about $4 million, claiming he was excluded from recent concerts, according to his attorney, Jeffrey Benice, reports the Associated Press.

Also named in the suit are the Carl Wilson Trust and Brother Records Inc., the Beach Boys' corporate entity. Wilson died of lung cancer three years ago. He was 51.

In the suit, Jardine says he has had difficulty booking shows for his "Beach Boys Family and Friends" group, because Love, the only original member in the current "Beach Boys" lineup, is promoting his group as the "real" and "genuine" group.