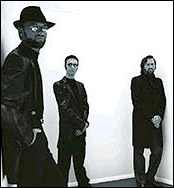 LONDON (CelebrityAccess MediaWire) — The surviving members of the Bee Gees, Robin & Barry Gibb have that they are planning on getting back together for a new tour.

"The two of us are getting back together again as we speak," Robin Gibb told BBC Radio's Test Match Special cricket program.

The Bee Gees, built around the brothers Gibb — Barry, Robin and Maurice — were a hugely successful act with a career that spanned more than 45 years. After Maurice passed in 2003, the remaining Gibb brothers announced that the group was being put on hiatus.

Now the band is reportedly preparing a series of live dates, although no details have yet been announced.

"The two of us are getting back together again as we speak…" Robin told the BBC. "(We) got through the breakwater of emotions… (Maurice was) not just a brother but a comrade in arms really. It's an emotional thing when you lose someone that close." – CelebrityAccess Staff Writers