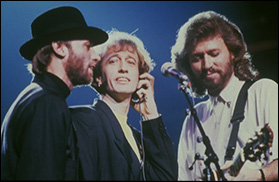 LOS ANGELES (CelebrityAccess) — The Bee Gees, one of the top-selling pop groups in the history of the genre, have signed a long-term worldwide agreement with Capitol Records that encompasses the trio's entire catalogue of recorded music.

In addition to 22 studio albums and several soundtracks, including the mega-selling Saturday Night Fever, the agreement includes the rights to numerous compilation albums, unreleased recordings and long-form audiovisual projects.

Capitol, in conjunction with Universal Music Enterprises (UMe), Barry Gibb and the estates of co-founding members Robin Gibb and Maurice Gibb, will look for new ways to leverage the group's catalogue.

"There are few artists in history who have created a body of work so successful, diverse and timeless as Barry, Robin and Maurice," said Universal Music Group Chairman & CEO Sir Lucian Grainge. "We're delighted to welcome the incomparable music of the Bee Gees to the Universal Music Group family and we look forward to building upon their incredible legacy."

The Bee-Gees are one of the most commercially successful acts in history, selling more than 220 million records worldwide over the course of their long careers. – Staff Writers