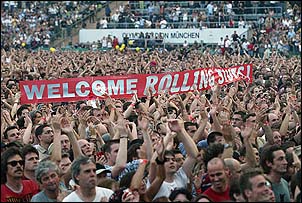 (CelebrityAccess News Service) – A record 13,437 worldwide concerts were reported in 2003 to Billboard Boxscore, which tracks touring activity, representing an increase of 25% from the previous year. In North America alone, the concert industry reported a record $2.2 billion in gross box-office revenue for the year.

Veteran artists took center stage, scoring the top three tours for the year through Nov. 18. The Rolling Stones topped the chart by grossing $299.5 million in box-office receipts for the year. The Stones played to more than 3.4 million fans worldwide. Next on the Billboard Boxscore list were Bruce Springsteen ($181.7 million) and Cher ($76.3 million).

"The fact that so many veteran acts again did so well is a testament to the power of touring in building a long career," says Ray Waddell, senior writer, Touring, for Billboard. "You can't download a concert, illegally or otherwise. You're either there or you're not." –Bob Grossweiner and Jane Cohen