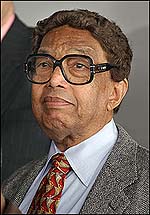 (CelebrityAccess MediaWire) — Dr. Billy Taylor will retire from performing effective March 5. He made the announcement while in Paris to receive a Life-Time Achievement from UNESCO as part of the International Music Day: Jazz Meets The World: A Tribute to Jazz in Education.

Although Taylor will no longer be accepting engagements with his trio or as a guest artist, he will continue his activities as artistic advisor for jazz at the Kennedy Center in Washington DC and as the principal artist in residence of the Jazz in July program at the University of Massachusetts, as well as many other clinics and educational activities on behalf of jazz. He will concentrate on producing and releasing archival CDs and DVDs from his personal Soundpost Recordings imprint.

Although he has been considering this change in his agenda for some time, it was Taylor's visit to Paris that served as the catalyst for this decision. "'I've always wanted to stop performing publicly when I was still feeling good about my playing," he explains. "I didn't want to hang around until I felt bad."

"I remember when Lionel Hampton was very ill, toward the end of his life. The people around him let him perform although he couldn't really play. He'd just tap on the vibraphone and smile. He felt good and I'm sure that added some time to his life. But I didn't want to do that."

"In Paris, I was really feeling good, physically, and also, when I played I was very pleased. At the concert for UNESCO, I played All The Things You Are. I had first performed that song in 1946 in Paris, during my initial European tour with Don Redman and I chose that composition because I wanted to see how it would work. I played it, and people really responded. That's when I knew the timing was right."

Although a stroke in 2001 forced Taylor to return to the woodshed, his playing since his re-entry to the music full-time two years ago has continued to improve, dramatically. "When I found out I couldn't play the piano, after the stroke, it was the shock of my life," he said. "I've spent so many years trying to play well, then all of sudden, zap, it's gone. I said wow. So for the last couple of years, I've been on a mission to get it back."

Not surprisingly, given the persistence and talent of this remarkable man, Dr. Taylor was able to regain his chops. "I can play anything I used to play, but not as fast," said Taylor. "But I can play it. So the past few years, I focused on getting my playing as good as I could make it. The audience has always been my barometer. If I can reach out and touch someone when I play, I know it's working. So in Paris, it was working. In fact, I couldn't have done it any better than I did."

One thing he will miss, Dr. Taylor explains, "is the joy of regular collaboration with my working Trio (bassist Chip Jackson and drummer Winard Harper). I've always put a lot of pressure upon myself. That's the one habit I couldn't break. But when I was performing, these guys made it a lot easier. Both of them are really special, both as performing artists, and friends."

The final three performances scheduled prior to Taylor's announcement are: