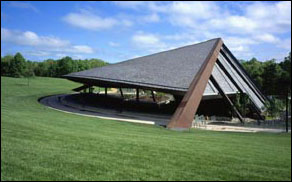 CUYAHOGA FALLS, OH (CelebrityAccess MediaWire) — The Musical Arts Association in Cleveland is looking to pare down the plot of land that the Blossom Music Center in Cuyahoga Falls sits on by as much as 600 acres but exactly who'd they sell it to is an open question.

After determining that the center only needed 200 acres, the association approached the Cuyahoga Valley National Park which is adjacent to the Blossom, offering to sell the 600 acres to them, however the park declined as it did not have the estimated $8 million to make the purchase, the Beacon-Journal reported.

Observers are concerned that the lack of a federal purchase of the land might open the door to private developers who would use the land for residential properties. Additionally, a third property, an adjacent privately owned golf course is also up for sale.

"It's a red-line issue," John Debo, park superintendant told the Jorunal Beacon said "Keeping the land from being developed is the highest priority for the park."

The park is also constrained in its negotiations by federal requirements that they offer fair market price for the land. Further funding for purchases like this may be made available by Congress, but the park service has identified 1.8 million acres nationally, that should be acquired for a price tag of 1.9 billion, however Congress has only budgeted $100 million for FY 2009. – CelebrityAccess Staff Writers