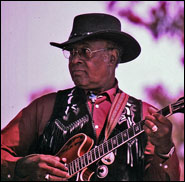 Born February 11, 1937 near Lake Charles, Louisiana, in the small town of Welsh, Phillip Walker's earliest musical influences came via the Cajun and Creole rhythms he heard as a youngster. A second cousin to Clarence "Gatemouth" Brown and huge admirer of T-Bone Walker, Phillip began making a name for himself in the early 1950s with his first recording session backing pianist Roscoe Gordon. At the age of 16, Walker left home to tour with Zydeco king Clifton Chenier (who incidentally gave the young fledgling Walker his first bona fide guitar) and never looked back.

After relocating to Los Angeles in 1959, Walker cut his first side as a bandleader; the storming "Hello My Darling", produced by J.R. Fulbright for Elko Records. His first full length album didn't appear until much later though. With the help of long-time supporter and producer Bruce Bromberg, Walker cut the excellent LP "The Bottom of the Top" in 1973 for Hugh Hefner's short-lived Playboy label. Over the next three decades Walker's musical career continued to pick up steam with numerous recording projects for HighTone, Black Top, Rounder, JSP and Alligator Records.

Label CEO Randy Chortkoff shared some of his fond remembrances of working with Phillip these last few years by stating "Phillip was a consummate gentleman and it was an absolute pleasure working with him over the years. It was a pleasure producing his last album "Going Back Home". We chose the music on that album based on Phillip's musical tastes and background. He especially enjoyed doing the Champion Jack Dupree song "Bad Blood". It later became a standard in his live repertoire, in addition to one I wrote for him, "Lay You Down". We also had a great time with him years ago at the Moulin Blues Festival in Holland where he performed with The Mannish Boys, and the again at Ground Zero in Clarksdale, Mississippi for our 3rd Annual Delta Groove All-Star Blues Revue." – CelebrityAccess Staff Writers