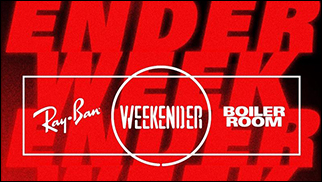 According to Vide Media's Thump, festival-goers reportedly captured video of the precipitating incident that showed an African-American woman being arrested. The incident reportedly escalated when a second woman asked the arresting officer for his badge number.

A festival-goer told Billboard that the event was put on 'total lockdown' and attendees were required by police to return to their rooms.

In a statement released to the Leighton Times News, Police confirmed that one woman, 19-year-old Kaylan Jones, was arrested at the festival and that 18 other people were cited for disorderly conduct. Jones was charged with possession of a small amount of marijuana, possession of a controlled substance, resisting arrest, false identification to law enforcement, and institutional vandalism.

As is now well documented, our inaugural Ray-Ban x Boiler Room Weekender event was terminated early after issues with the local security and law enforcement. Following an unnecessary display of force against attendees present, we had no option but to shut down the music halfway through the second night of the festival.

At around 2am on Sunday morning, a security search escalated quickly and abruptly, leading to one arrest and a number of physical confrontations. Following this, we were informed by on-site security that reinforcement from local police forces would be called into the resort.

We believed that having such a deployment of law enforcement to deal with a peaceful and respectful crowd was not in the spirit of the Weekender. Before this situation occurred, not a single arrest was made, nor medical attention required for the 3000 attendees at our event. That speaks for itself. After the performances were canceled attendees were given time to vacate the premises, as the only course of action that would keep that incident isolated and prevent further problems.

We are deeply sorry this happened: for those who traveled long distances to the Weekender, and had to deal with an unexpected and unpleasant situation instead of the safe, open, inclusive environment we spent a year working toward. Our intention of the Weekender was to provide a space which amplified the amazing music and message of the artists and creative minds we work with, and who trust us to promote them through our channel. We do not take lightly how that was compromised.

We believe the actions of the local security on site at Split Rock were wildly inappropriate, breaching clear terms outlined with them. We made the call to prematurely ensure the safety of our guests, collaborators, and all artists present – our absolute number one priority.

The atmosphere from guests at our Weekender was respectful, peaceful and immensely friendly. It was the best crowd we could have asked for, a truly diverse blend of people. We want to extend thanks to everyone who dealt with the shutdown in a mature, good-natured manner.

We apologize for the silence over the past two days: it was imperative that we spent the time gaining more information on the matter, gathering facts, consulting those affected, and building a clear picture of what transpired, especially given the legal implications for those cited or arrested.

The first thing to address is those who were directly affected by the conflict. A woman in custody remains in a county jail. We are in contact with her family and are doing what we can to assist her case moving forward. We heard a few hours ago that she is being released today. Another guest suffered grievous bodily harm from the head of local security at the resort; we too will be assisting him throughout the legal process.

The second is an unexplained and unauthorized increase in heavy-handed policing and outward displays of aggression by Split Rock's security team from the beginning of Saturday's programming. Split Rock steadfastly insisted on using local law enforcement and local security, instead of our intention of bringing in trusted staff from New York. Those local law enforcement and security showed a shocking lack of respect and professionalism to our attendees. We established a detailed framework for how they were to act and keep the event running safety and smoothly; these protocol swere consistently broken, and we will be investigating our recourse in this respect.

Boiler Room wholeheartedly rejects the approach taken by the law enforcement and security at Split Rock, and any kind of underlying intolerance and hatred that may have underpinned their aggression. Again, we are deeply disheartened by the situation that took place at our Weekender and will be taking every necessary course of action to help those affected, and follow due process with the local police.

The Ray-Ban x Boiler Room Weekender was built in tandem with a diverse network of collectives, labels, parties and creatives from across the United States, who we are proud and humbled to support. The entire point of this event was to unite these various corners of the underground, do something that we believe furthers the culture, and fosters understanding and inclusivity. Thanks to all who came and made it what it was.