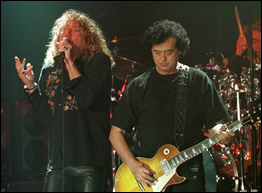 LONDON (VIP-NEWS) — Jason Bonham says he would go on tour with Led Zeppelin in "a heartbeat".

He is the son of the band's original drummer John Bonham, who died in 1980.

Since then, it has been rumoured the band will bow to fan pressure and announce some more dates.

More than eighty million people around the globe applied for tickets for the 02 event, just 18,000 of them successfully.

It was the first time in twelve years that founding members Robert Plant, Jimmy Page and John Paul Jones had performed together.

Bonham told Newsbeat: "It was a fantastic night, it was emotional, it was everything I wanted, and hoped it would be.

"I knew I could do it, but could I do it when it needed to be done, with the nerves and everything?

Since last year's gig, the various members of the band have played down speculation that they will perform together again.

Ian Astbury, singer with The Cult, told an audience in LA that they were down to support a band beginning with the letters LZ.

Guitarist Page and bassist Jones teamed up with Foo Fighters on stage during their Wembley stadium gig on 7 June.

Foos singer and former Nirvana drummer Dave Grohl told the audience: "Welcome to the greatest night of my life."

He has expressed his wish to lend his services to Zeppelin if they should call on him.

He is said to have told journalists at a basketball game in January that he wasn't sure if the band would play any more gigs.

Bonham said: "I hope that I would be put into the loop at some point.

"Who knows? All I can say is that it was better than I could have imagined.

"My fingers are crossed and I would do it in a heartbeat." According to BBC.