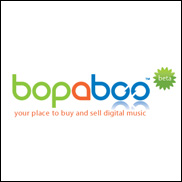 BUY AND SELL MP3 (Hypebot) –
A Look Inside A Very Controversial Startup
You paid for that mp3 and you don't want it anymore. Why not sell it? Despite a legal quagmire that suggests that you shouldn't, startup Bopaboo.com says you can and they'll help you.

Still in private beta, bopaboo provides a simple marketplace to buy and sell mp3's and potentially other digital content. In a test, I was able to upload a random mp3 and have it on sale for 45 cents (a typical price) in seconds. Using a bopaboo provided $1 credit, I bought another mp3 and downloaded it easily. Seconds later, since it was still in my online locker (bopabox) as well as on my computer, I had the same track back up for sale.

Therein lies the legal rub for the music industry and for bopaboo, the ease with which digital music can be copied. Music attorney John Strohm looked at the issue and concluded that the most obvious illegal act happened when the track was copied and bopaboo did not do the copying. But "is there a way to confirm that the files being sold are obtained legally and that the seller is not retaining copies?," he wrote on Idolator. "If not, is a company truly able to insulate itself from liability through its terms of use, and are consumers willing to take the risk?"

In other words, just like a pawn shop can be prosecuted for selling goods it could reasonably have suspected were stolen, Bopaboo might be proven to be facilitate and even encourage the sale of illegally copied tracks and the buyer to have purchased stolen or copied goods.

Bopaboo is not unaware of the legal challenges it is certain to face. "When we began Bopaboo, we set for ourselves not a modest challenge: can we provide consumers a legal method and marketplace to buy and sell digital music?," executive Alex Meshkin wrote on the company's official blog. The next chapter's should be interesting.