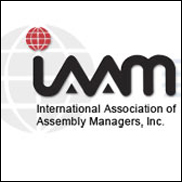 COPPELL, TX (CelebrityAccess MediaWire) — The International Association of Assembly Managers (IAAM) is pleased to announce, Brad Mayne, CFE as the recipient of the Charles A. McElravy Award. Mayne will be honored at the IAAM Annual Conference & Trade Show in Boston, MA on July 27, 2009.

“When asked to serve in any capacity, Brad always says yes. He is a staunch supporter of IAAM’s educational initiatives and a mentor to many. He sets, practices and promotes high ethical standards in his business dealings. His leadership is second to none and IAAM is well served by bestowing such a high honor on a recipient of Brad’s caliber,” said, IAAM President Robyn Williams, CFE.

The McElravy Award was initiated in 1963 and is granted at the discretion of the Board of Directors for extraordinary contributions to the Association and the profession of public assembly facility management.

IAAM Executive Director, Dexter King, CFE said, “Brad is the ideal candidate to receive this award. He is an individual that is a proponent for the industry and never ceases to give back. His involvement with the association is to be commended and we are honored to have leaders of his stature involved with our mission.”

Mr. Mayne has been a member of the association since 1987. Some of his accomplishments include service on the Board of Directors, the Board of Regents, Board of Education, Professional Development Committee, and Certification Board. He has also served on the IAAM Board of Trustees for 5 years as Treasurer and Chair-elect as well as an instructor for the Public Assembly Facility Management School at the Oglebay Resort.
–by CelebrityAccess Staff Writers