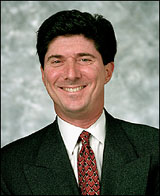 (CelebrityAccess News Service) – The current issue of Entertainment Weekly presents its annual list of the 101 Most Powerful People in Show Business. The charts are broken down into two sub-charts: Creatives and Suits.

In the Suits category is Brian Becker, the 46-year-old chairman/CEO Clear Channel Entertainment, who ranked at number 11.

EW says: "While CD sales plummeted, the concert industry enjoyed record numbers in the first half of 2003, and CCE generates 70 percent of that business. There are some clouds to this silver lining: Soaring ticket prices ensure that the tour biz is dependent on well-off boomers, on and off stage (scarily, the Dave Matthews Band and the Dixie Chicks are the only under–40s consistently selling out arenas). And insurgent rival AEG Live–now home to several former CCE staffers–could benefit from vocal public antimonopoly resentment."

Becker placed at 27 in 2002 and 82 in 2001, but both those charts included Creatives and Sales, which were separated this year.–Bob Grossweiner and Jane Cohen