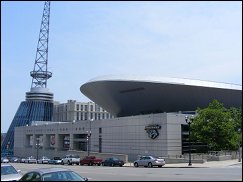 NASHVILLE (CelebrityAccess MediaWire) — Bridgestone Arena and the Country Music Association announced today they have entered into a three year agreement which will see the venue play host to the annual CMA Awards in 2011, 2012 and 2013.

Bridgestone Arena has hosted the CMA Awards every year since it first hosted the event in 2006.

“Being the home of the CMA Awards is a great source of pride for us at Bridgestone Arena,” Bridgestone Arena Vice President of Booking Brock Jones said. “It is a fantastic event and first-class way to showcase our venue, the talented people in the Country Music industry and the community we all call home.  We greatly value our relationship with the CMA and all that it represents. We are thrilled to extend our agreement with the CMA Awards for the next three years.”

“Country Music’s Biggest Night deserves a world-class venue and we have that with the Bridgestone Arena in Nashville,” CMA Chief Executive Officer Steve Moore said. “Our industry appreciates the convenience and amenities, and our attendees enjoy the downtown location with access to clubs and hotels.”

Bridgestone Arena opened in December 1996 and has been the home of the National Hockey League’s Nashville Predators since 1998. The facility has hosted more than 13 million guests for such events as the NCAA Men’s Basketball Regional Tournament, SEC and OVC Men’s & Women’s Basketball Tournament, as well as concerts for entertainers such as Lady Gaga, Paul McCartney, Garth Brooks, Elton John, Billy Joel, the Rolling Stones, Tim McGraw, Keith Urban and Jimmy Buffett.