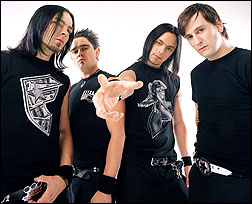 BRIDGEND, South Wales (CelebrityAccess MediaWire) — British Metalcore outfit Bullet For My Valentine have been forced to postpone the remainder of their sold-out UK tour. The cancellation is apparently due to vocalist Matt Tuck suffering from a throat infection.

"To everyone that was coming to our shows this week, we are so, so sorry about this. I feel so bad that I'm letting you guys down, we were looking forward to this tour as much as you were cos these are the biggest shows we've ever done. The truth is I just don't have the power in my voice that I need to put on the kind of blindin' show you expect to see and hear from Bullet. I promise you these dates would not have been pulled it wasn't for a damn good reason, and unfortunately for you guys, and us, the docs are telling me to take it easy and rest up. We are NOT cancelling these shows but just postponing them. We will also be back in Edinburgh to do a full show for you guys to make up for the gig we played on Monday that we had to cut short. I promise you we WILL be back – see the website for all the re-scheduled dates. Thanks for your all your messages of support, they really mean a lot to me. See you in January, Matt." – CelebrityAccess Staff Writers