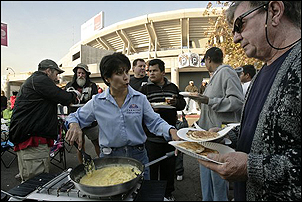 SAN DIEGO (CelebrityAccess MediaWire) — Wind-driven wildfires continue to devastate southern California, having burned a swath through a half million acres of land, displaced half a million people and destroyed more than 1,300 structures, the fires have also played havoc with concerts that had been scheduled in the region.

A double-billed event by Jennifer Lopez and Marc Anthony set for Wednesday at the Cox Arena was moved to Nov. 10 and nearby Qualcomm Stadium is being used as an evacuation shelter, meaning that the SDSU vs. BYU football game planned for Saturday has been canceled and a Sunday NFL match between the Texans and Chargers is still up in the air. Nor will the Lakers and Utah Jazz grace the boards at the San Diego Sports Arena

The House of Blues in San Diego pulled the plug on a Wed. Boys Like Girls & All Time Low show and a Peter Frampton show on Friday has been canceled as well.

The Jersey Boys date at the San Diego Civic Center planned for Tuesday was called off as was Earliment at the Casbah.

Jesus & Mary Chain's 4th & B show was scrapped and Mum's Tuesday gig at Belly Up Tavern in Solana Beach suffered a similar fate.

San Diego club SOMA put the kibosh on Wednesday's Chevelle Gig along with Madina Lake & Mayday Parade on Thursday with no word yet about a makeup show.

If you have a show that's being postponed or canceled that isn't listed here, let us know and we'll be help you get that information out. Email us at news@celebrityaccess.com or give us a call at 860-536-5700. – CelebrityAccess Staff Writers